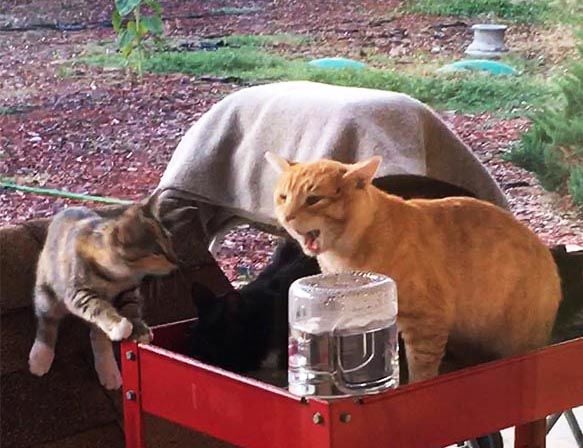 Cami and her Daddy 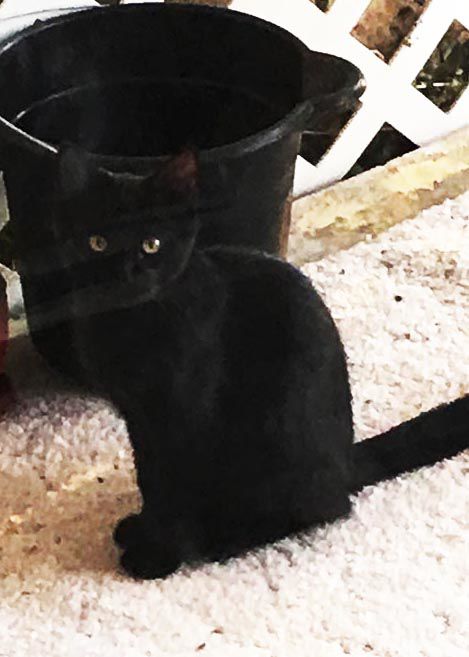 There's no doubt about it, humans love their pets. It's not uncommon these days for people to own more than one pet. It seems multiple dogs now reside in homes more than they did in the past. It makes sense. Dogs thrive on companionship and are less likely to be lonely and troublesome when there are more than one

House cats, on the other hand, can go either way. Some house cats don't seem to mind the company of other felines. Others, however, just want to be the only cat and appear content to stay that way.

One of the most heartbreaking things is to discover homeless cats, particularly "neighborhood cats," sometimes known as "community cats" or ferals. These felines are often born in the wild, but there are some that came from households but were abandoned or lost at some point.

True feral cats are wild and probably can never be domesticated. They continue to breed throughout their lives, coming into season at least twice a year. A single pair of cats and their offspring could produce as many as 420,000 kittens in just seven years. Delta County has a feral cat problem and is trying to do something about it, but it takes caring citizens to help resolve the overpopulation growth of cats who do not belong to anyone and must, for the most part, fend for themselves.

I am a woman who loves animals and grew up with pets. My animals were family members (even the mules!) and were well fed, healthy companions. Later in life, I chose to be with a man who also loves animals but is severely allergic to them, particularly cats. Before I became involved with my partner, I never dreamed I would give away an animal that I loved. But I decided to do just that.

It was not an easy thing for me, but I took the time and effort to advertise to find a good home for my pets. Even in my sadness, at least I knew they were going to wonderful people and would receive the best care for the rest of their lives. It was a small price to pay for the comfort of my partner and relief from the guilt I felt from residual dander on my clothes or in my car, that caused him physical distress.

A solution to not having pets in my life appeared a couple of years ago when I moved into a neighborhood in Orchard City and noticed a scrawny black female cat hiding in the bushes in my backyard. When I realized she did not act like she belonged to any of my neighbors, I felt sorry for her, but still did not feed her. She was keeping my home and my yard free of varmints, and once in a while she'd catch a bird or two. She seemed to be doing just fine on her own.

Fast forward six months ... one summer day I noticed a lone black kitten tagging along with Mama Cat. The kitten found some scraps of garlic bread that I had thrown out into my backyard for the birds. My heart opened up and I decided to start leaving some food out for Mama Cat and her black kitten. Soon the two of them were eating on my patio. I named the young female "Spooky" and grew fond of her as she grew somewhat tamer.

Unfortunately, something happened to the half-grown black cat and she vanished for good. Mama Cat stayed around, however, and soon Pete, a big old orange tabby tom, joined her for free meals on my patio. One morning last summer, out of the blue, I looked out and saw Mama Cat and two new kittens, all perched on the roof of the heated cat house that my son had built. Mama Cat was introducing me to her new litter. Eventually, these two kittens became friendly with me. They are now seven months old. The small female is a gorgeous tortoise-shell/calico we named "Cami" because of her camouflaged coat. Her brother is a beautiful all-black tom whom I named "Spooky (II)."

My feral feline family is punctual for meals, morning and evening, and they often sleep in the heated shelter I've provided. I soon grew concerned about Cami getting pregnant. So I called the Surface Creek Animal Shelter in September and obtained one of their humane traps, hoping to catch all three cats -- one at a time, of course -- to take them to the Surface Creek Veterinary Clinic for a free spay or neuter. The plan was to capture all except Pete, the tom, as I've never been able to determine if he belongs to someone in my neighborhood.

After a few weeks, I believed that Cami was tame enough to go into the cage by herself if I baited it with some delicious treats. The instructions clearly stated: DO NOT ATTEMPT TO HANDLE THE CAT. Well, I thought I knew better. I had the cage open inside my house. Cami and Spooky would often step inside, and Cami would even let me pet her sometimes. I was confident that she would go right into the cage, it would spring shut ... and off to the vet we'd go the next morning.

Unfortunately, Cami was smarter than I was. She freaked and backed out of the cage before it sprung. What ensued was a wild chase around the house - the poor cat terrorized, climbing the walls, knocking down the metal shelf in my laundry room - and me in a panic. I called my partner, who came right over, and we both chased her. When we finally were able to throw a towel over Cami, she managed to sink her teeth into one of us. After we got her secured in the cage, we had to take a trip to the emergency room for antibiotics. A cat bite can be a life-threatening situation. I felt terrible for not following the instructions that said in big print: DO NOT ATTEMPT TO PICK UP THE CAT.

Long story short: Cami made it to the vet the next morning, got spayed and I brought her home that afternoon. I let her out of the cage onto the patio and she acted as though nothing had happened. She was completely happy to be back with her family and, of course, was ravenous and ate a big supper.

I told my partner at that point, "I can't go through this again." But time passed and Mama Cat had been pregnant since late summer. We had a big snowstorm and freeze the last weekend in October, and when I saw Mama Cat again, she was skinny. I figured the kittens had died. After four more weeks, I decided to try to capture Mama Cat and get her spayed. She didn't need to have another batch of kittens! My partner and I set up the trap on the back patio after I'd let the cats go hungry all day.

Well, Mama Cat walked right into the cage ... and BANG! The door came down and she was captured. It was so easy! I couldn't believe it. I covered her cage with the blanket and she immediately calmed down. Then we carried the cage to the back of my car, so I could drive her to the clinic the next morning. I had made the appointment with the vet that afternoon. I was so proud of myself ... and nobody had been bitten.

The next morning I was up early, eager to go to the vet. I opened the driver’s door in my car, and there was Mama Cat, standing on the passenger seat, staring at me! She had gotten out of the trap inside my car. I closed the door in a panic. Now what was I going to do? There was no way I could get her into the cage or drive to the clinic with Mama Cat loose in the car.

So, I did the only thing I could do at that point ... I let her out. That cat FLEW out of the back of my car. She must have sailed 15 or 20 feet in the air before landing on her four feet on the concrete driveway. Then she high-tailed it across the road to the neighbor's shed, where we later found out she had four NEW kittens hidden away.

Sadly, the vet clinic would have rejected her because she was still nursing. My efforts were in vain. I am now concerned about having to feed four more feline bellies ... and not sure when I can convince Mama Cat to climb into the humane trap again ... probably never. The lesson I learned that day: Latch the back door of the trap/cage. Cats are intelligent, conniving creatures at times. If there is a way for them to escape, they will escape ... especially when they have hungry kittens waiting for them across the road.  Time will tell if I get another chance to capture Mama Cat.

The Surface Creek Shelter has humane animal traps you can borrow (with a $35 refundable deposit) to capture feral cats. There is no fee, just some paper work to fill out and make an appointment with the vet ahead of time. If done right, it's an easy catch-neuter-and-release program that appears to be working, according to the people at the shelter.  They can be reached at 856-2346. The shelter depends on donations to run their shelter, which is a "no kill" shelter and is a great place for the animals. Donation boxes can be found at Big John's Lumber, Delirious Liquors, Cedaredge Food Town, Mesa Liquors, Go-Fer Foods, Short Branch Liquors, Stacy's on Main, and the Apple Shed. You can also send checks to the Surface Creek Animal Shelter, P.O. Box 853, Cedaredge CO 81413.

Delta County's other humane societies have programs that work with people to get their pets spayed or neutered by using coupons that you take to the vet within 60 days. Delta County Humane Society will provide subsidy coupons to qualifying applicants based on a sliding income scale. You can go to their website at www.deltacountyhumanesociety.org to fill out an application on line.

In the North Fork area, Delta County Citizens for Animal Welfare and Shelter (CAWS) helps those who qualify to receive spay/neuter coupons for the surgery. They serve the greater Crawford, Hotchkiss and Paonia areas. These coupons are not for use with feral cats, however. For more information, call CAWS at 527-3350 or visit www.cawsonline.org.

The Trap-Neuter-Release (TNR) program is the most humane way of dealing with these "free living" cats. Feeding and providing a comfortable home base for my feral felines has been a very satisfying gesture and has provided me an alternative to having an indoor pet that would compromise my partner's health.

Eventually I hope to put my whole feline family on permanent birth control. It's going to take patience and a lot of compassion. But it's well worth it.