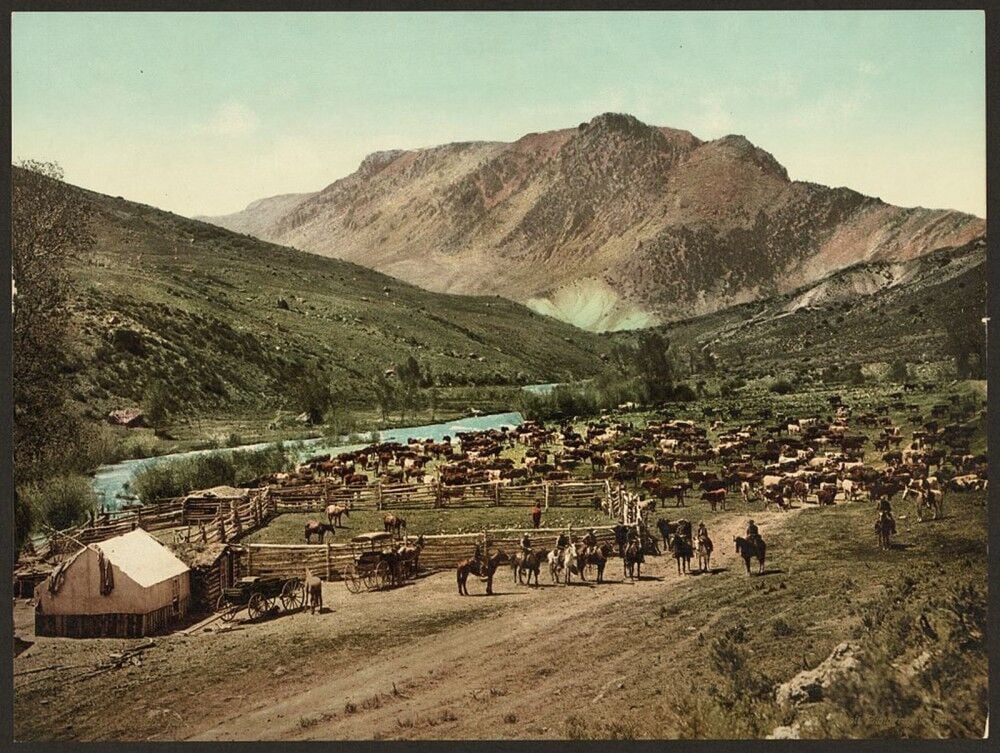 Round-up on the Cimmaron 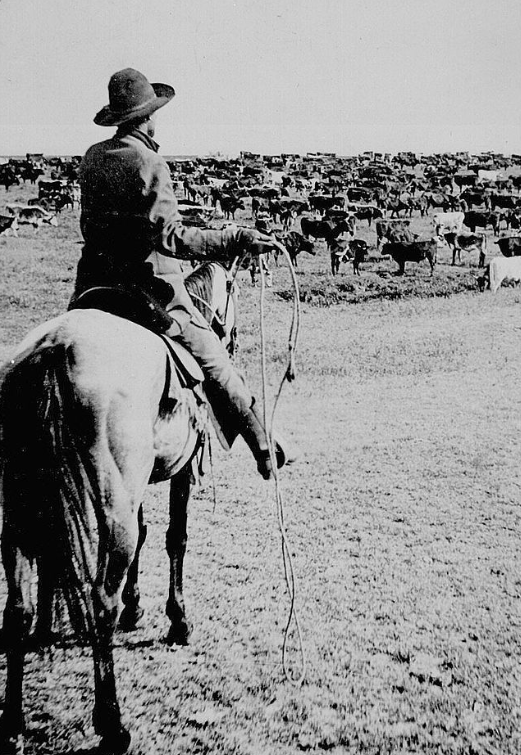 A cowboy and his herd 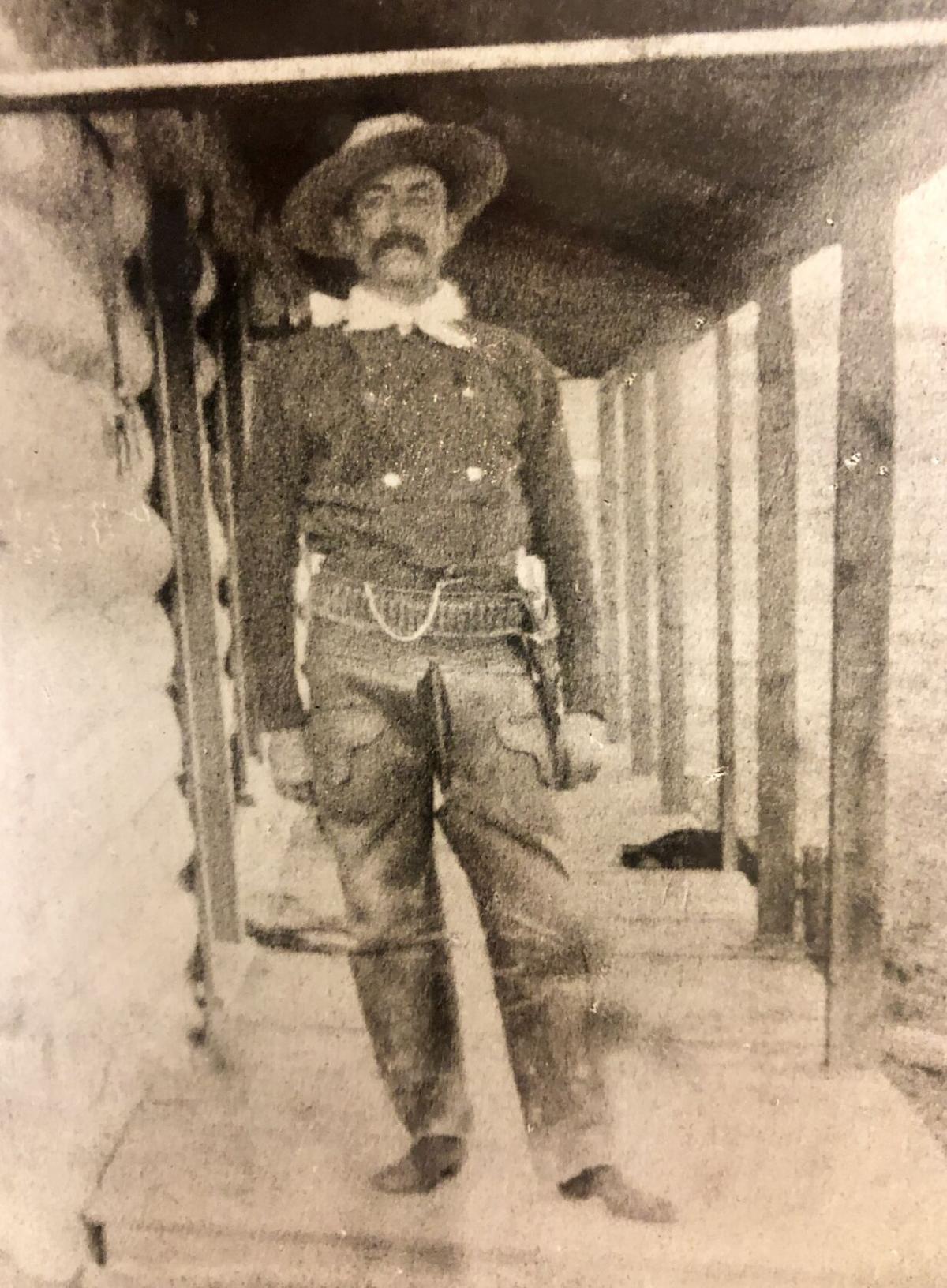 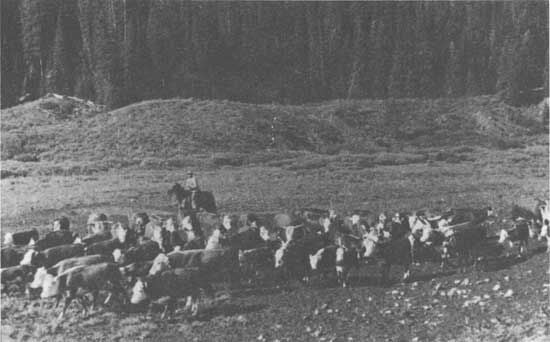 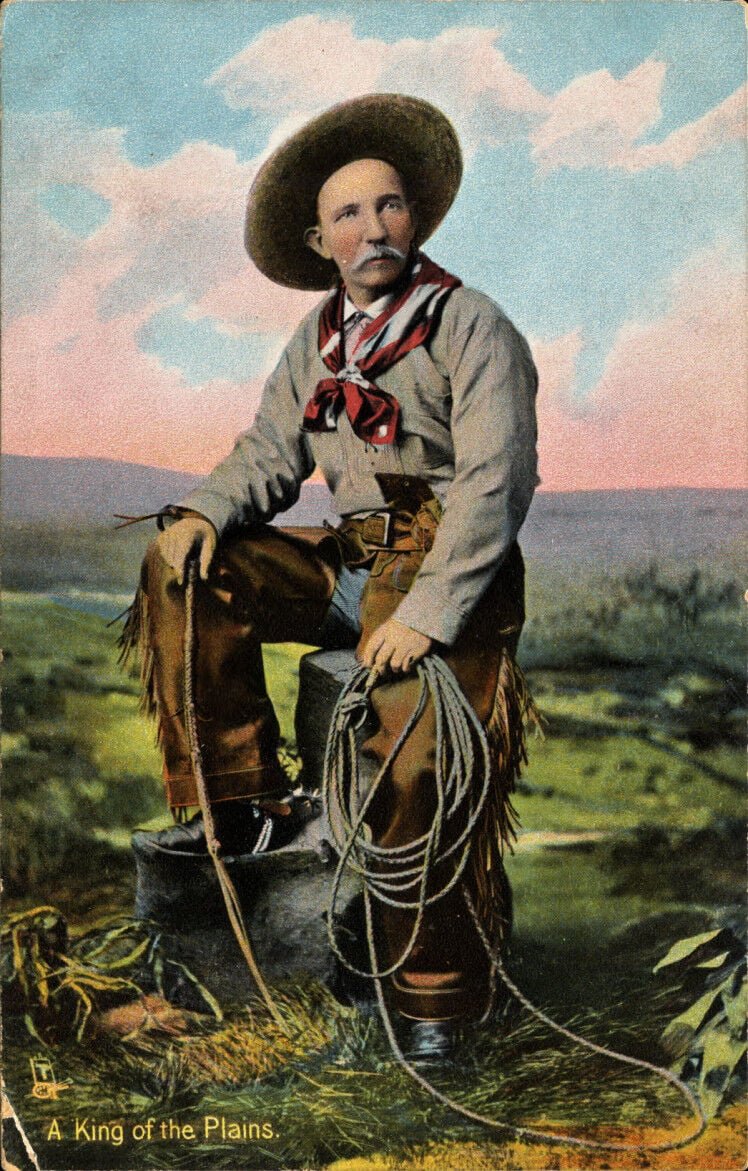 The colorful king of the plains 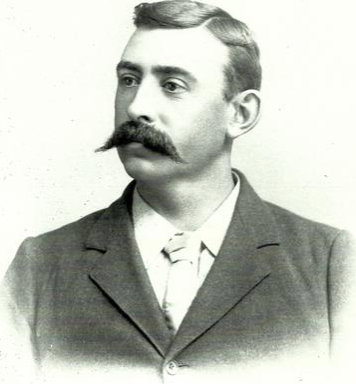 Hartman in the prime of his life 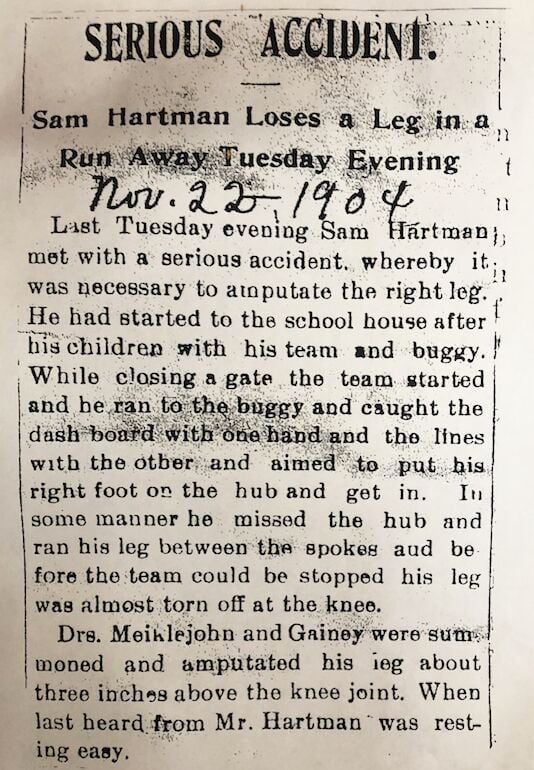 Clipping from the Delta Independent, 1904 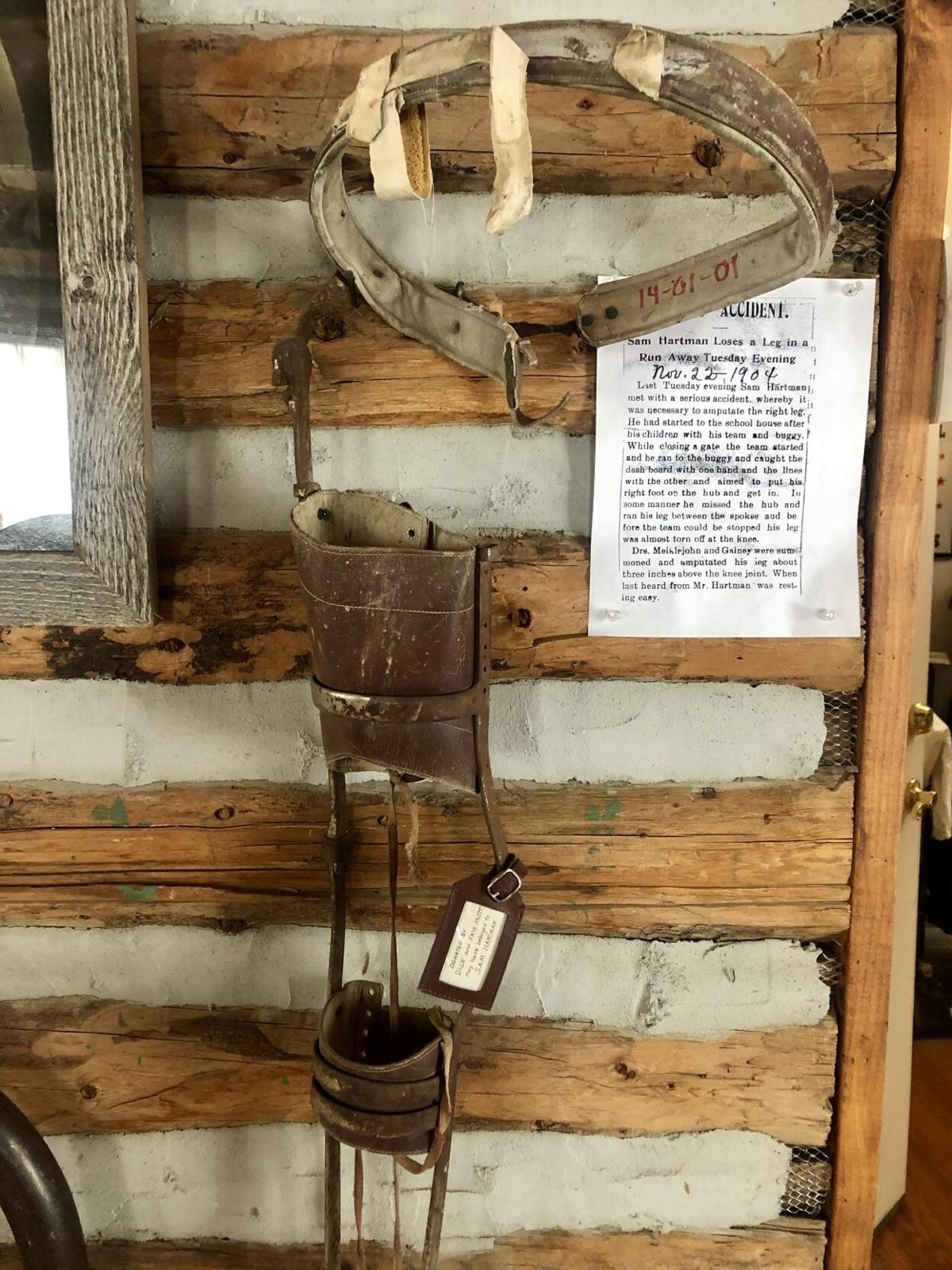 Prosthetic leg worn by Sam Hartman at the Hotchkiss/Crawford Museum

In the summer of 1877, a seventeen-year-old starry-eyed cowboy traveled from Denver to Saguache in a covered wagon and continued on horseback on the Old Indian Trail over Cochetopa Pass to the Los Pinos Agency above Gunnison. From there, he followed the Gunnison River and turned north until he reached the head of Curecanti Creek near present-day Crawford. The young man gazed out at the endless sea of knee-high grass where he saw his future laid before him.

Samuel Boone Hartman was born in 1860 in the Territory of Kansas. The youngest of five brothers and a descendant of Daniel Boone, Hartman spent the bulk of his early childhood with his father in Colorado during the gold rush. Thomas Hartman had heeded the pull west soon after Sam was born and he called on his family to join him when Samuel turned four. They settled in Denver and began ranching cattle there, although the soil and waterways on much of the southwestern plains were heavy with calcium carbonate, or “alkali” as it was called in those days, making water and soil somewhat hazardous for cowboys and their livestock.

When Sam caught sight of the verdant high territory west of the divide, wheels began to turn. This land would fast become the new Eden for adventurous cattlemen and he was determined to get there first. The problem was that much of the country he yearned for was in Ute Indian Territory, but Sam bided his time wisely. In 1880, he drove a sizable herd of horses from Denver to Gunnison, where his brother Alanzo, was postmaster and a pillar of the community. It was there where he scouted and prepared for the opening of the Uncompahgre Reservation to the northwest.

When the leaves turned in the fall of 1881, Sam Hartman rode the trail over Black Mesa accompanied by his partner, Ed Kreighton, a few hired cowhands, and several thousand head of shorthorn cattle. Along the way, they encountered wagons loaded with settlers and their possessions, traveling under the direction of Enos Hotchkiss and Samuel Wade, headed to the newly opened North Fork Valley. The coals from the recently abandoned fires of the Utes were still warm when Sam and Ed entered the promised valley and set up a residence near what is now known as Maher in Crawford country.

By the following season, other entrepreneurial stockmen began to pour into North Fork via the Old Indian Trail over Black Mesa. But it was Sam Hartman who could be found on the trail most often. In fact, the entrepreneurial cattleman who had already acquired the crown as the Cattle King, moved so many cows over the crossing that the former Ute highway became known as the Old Hartman Trail. Several other outfits also made their marks in those early days, including the Hartman brothers, Enos Hotchkiss and the Wade brothers, but It was Hartman who was the king of kings and who pioneered the grazing of shorthorn cattle in the North Fork, moving thousands of cows between the lush grasses of the valley and Cimarron where the cattle trains headed east toward Kansas City.

Around 150,000 head roamed Delta County between 1884 and 1890 during the rein of the cattle kings. who were truly the blue-bloods of the North Fork Valley. Their flamboyant clothes were a representation of their royal stature in the community and they sported high-heeled boots below woolen pants and wore double-breasted shirts adorned with white pearl buttons. They accessorized their outfits with colorful scarves around their necks and their unmistakable presence was always announced by the jingling of shiny spurs on the boardwalks of Main Street.

The short-lived era of the cattle kings was marked each year by the big summer roundup. Sometime in the middle of June representatives from each ranch gathered at the Diamond Joe cow-camp and elected a captain for the summer’s ride to move their cattle to their summer grazing grounds. It was considered a great honor to be a part of this yearly event. The residents of German Mesa (later renamed Lamborn Mesa during world war I) contributed by making several gallons of homemade wine for the horde of thirsty cowpokes, and one wonders if the annual roundup would have taken quite so long without the potent libations.

By the mid 1890s, much of the winter grounds were separated by barbed wire. Much of the land was now in poor shape from rampant over-grazing and the once rich sea of bluestem grass would never return. The royal cowpuncher’s days were suddenly numbered and bitter feuds erupted over grazing rights between cattlemen and sheepherders, sparking all-out war in many parts of the west. Sam Hartman’s partner Ed relinquished his shares of the outfit but Sam was reluctant to leave his beloved valley. Just when it seemed like things couldn’t be worse for the former king in the saddle, an unspeakable accident would test his resolve like nothing before.

In 1904, Hartman was climbing into a wagon when he slipped between the spokes of the wheel, spooking the team of horses who lunged forward, crushing Sam’s leg between wheel and buckboard. Miraculously, the determined cowboy dragged himself to a nearby house where the nearest thing to a doctor proceeded to amputate what was left of his leg. The operation took place on a kitchen table. It is said that a dehorning saw was used to perform the grisly procedure and a pull of whiskey was the only anesthetic available.

It was not uncommon for these backroom operations to end poorly, but Hartman came out on the other side - down but never out. He was fitted with a wooden prosthetic leg that now resides in the Hotchkiss Crawford Museum. Sam would continue to work in the cattle business until he passed away in 1938 at the age of seventy-seven. Arguably the most highly respected individual of his time, Sam Hartman embodied the pioneering spirit that shaped a new world, but the price of his youthful monarchy included his leg and eventually his ranch, which he lost when the cattle market bottomed out at the onset of the 1920s. He spent his later days living in Hotchkiss and running cows in the Raggeds Wilderness, refusing to abandon the lifestyle that had, in turns, given and taken so much from the tenacious cowboy.