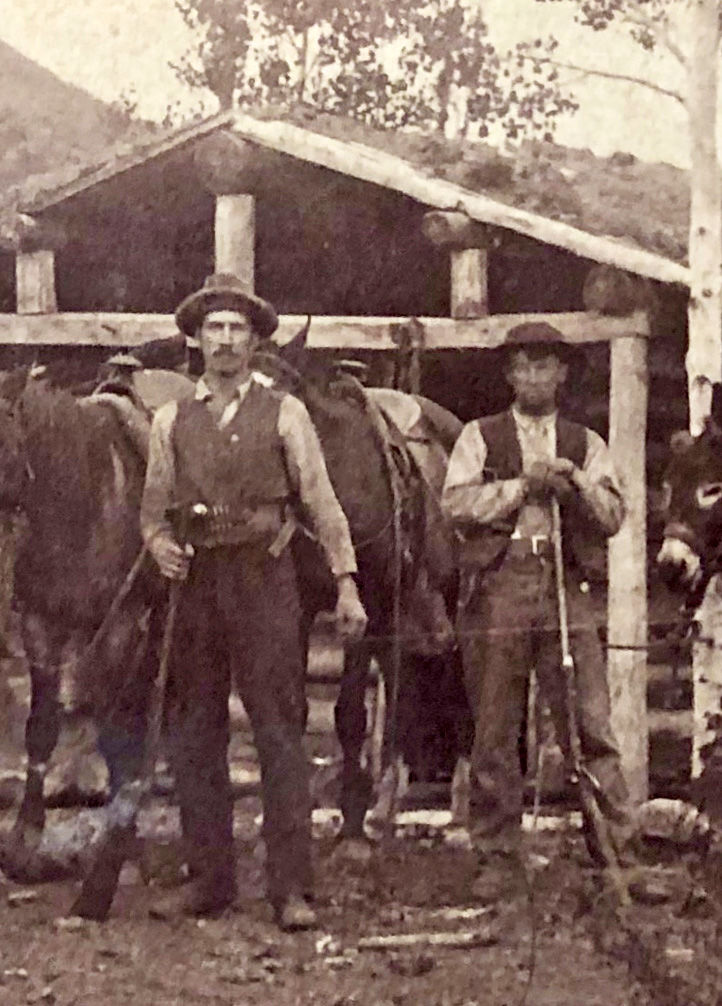 The short and sweet obituary of Samuel Angevine in the Delta Independent, 1905 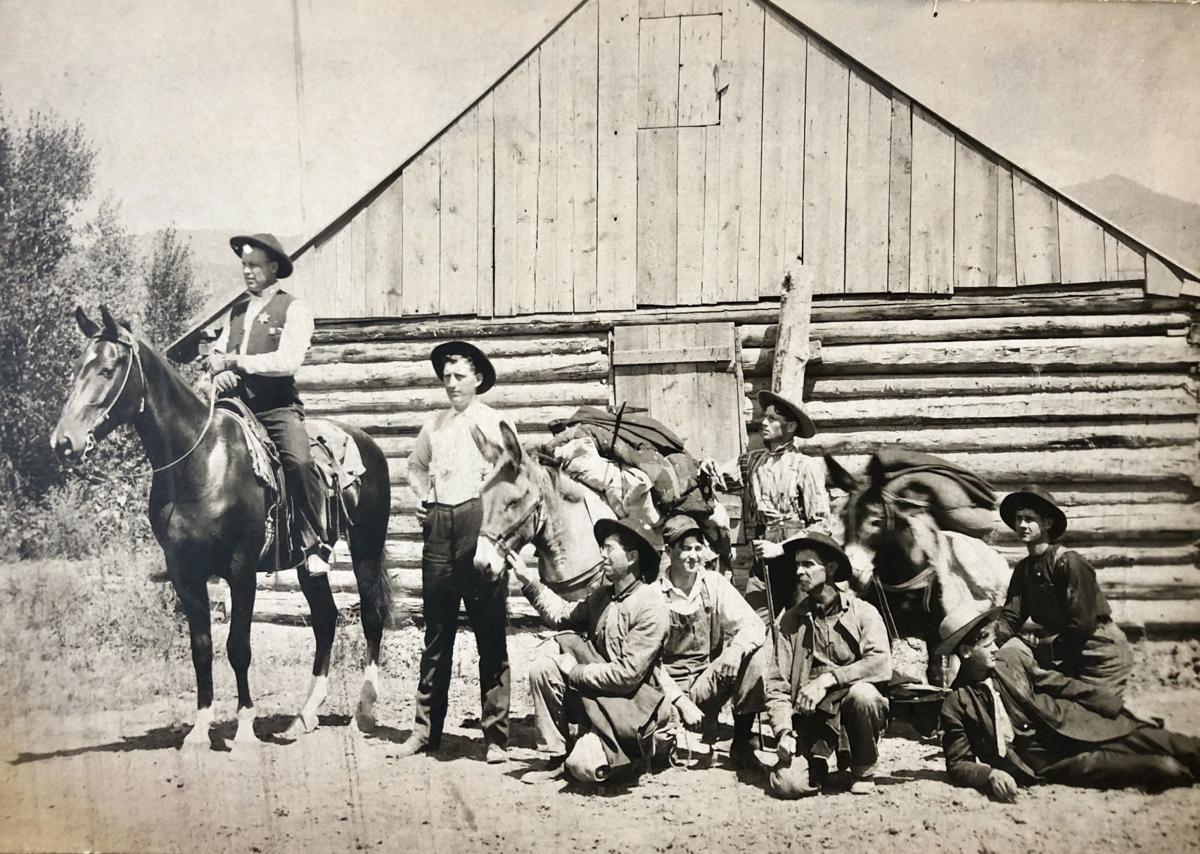 The Posse that went after Angevine takes time to pose for a photo. 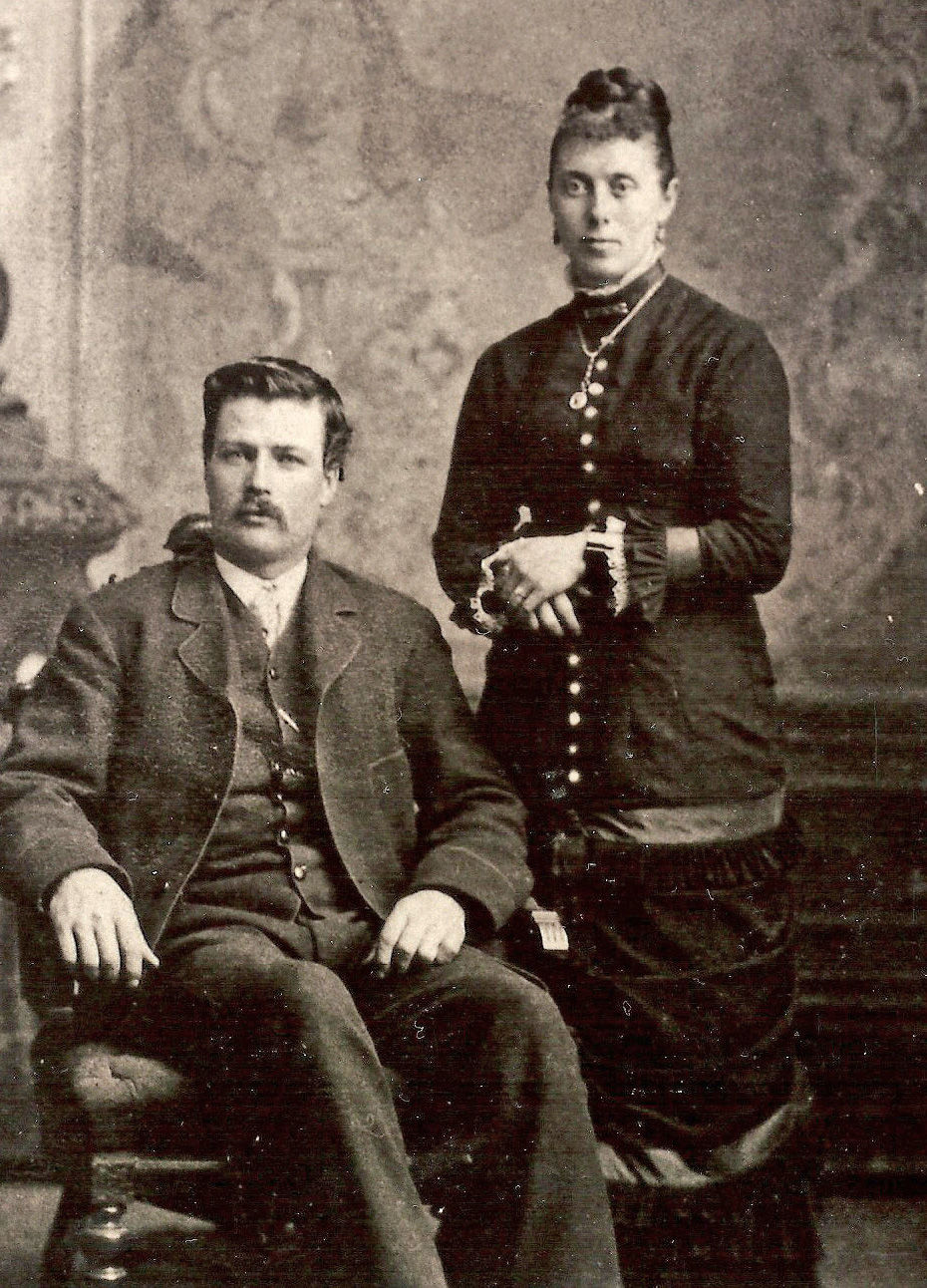 Riley Adams and his wife Julia of Paonia

Preferred weapon of many gunslingers - the Colt single-action revolver 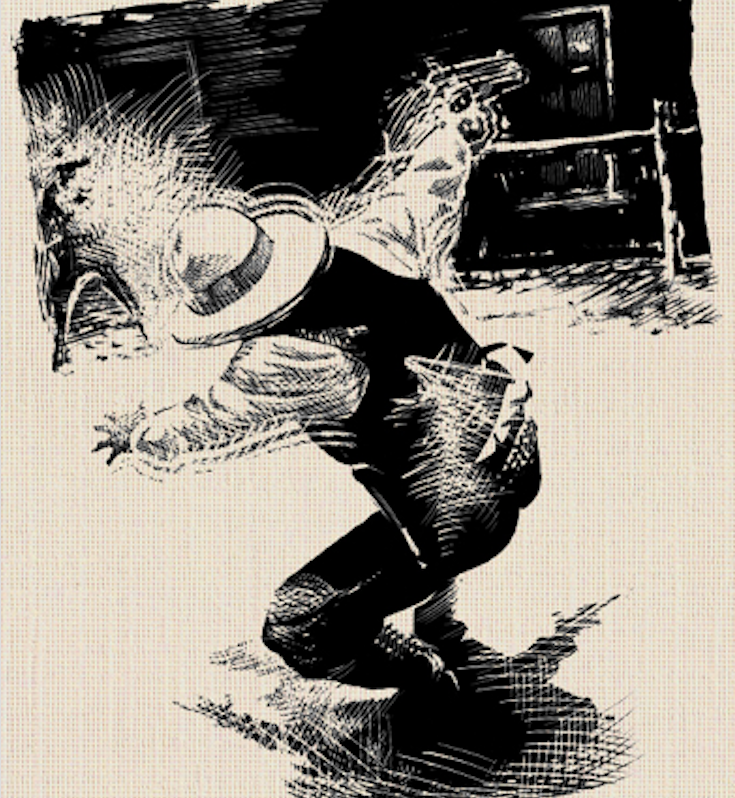 “The Lord made some men big and some men small, but Sam Colt made all men the same size.” - unknown

The Gunfighter’s Hall of Fame in Tombstone Arizona is filled with several familiar characters like Doc Holiday and Wild Bill Hickock. There is, however, a lesser-known figure with his place in the museum who was one of the original settlers in our own North Fork Valley. His name may not have filled the pages in the pulp novels of the day, but if you were to ask historians about the trigger gun, the name of Sam Angevine is sure to come up. The stories and half-truths that have survived the years leave a muddied path between fact and fiction, but one thing that seems to be agreed upon is that Sam had a fast temper and a faster gun, and several people paid the price by testing both.

Angevine was part of the first scouting party to enter the North Fork Valley led by Samuel Wade and Enos Hotchkiss in the Fall of 1881. He staked his claim in the upper end of the fertile valley just outside Paonia. Sam threw in with the early cattlemen of the day and helped to drive the first herds over Black Mesa to graze in the lush grass along the North Fork of the Gunnison River and further up the valley on Muddy Creek near the Wade’s cow camp.

Originally from Nova Scotia, he was said to have fled the northeast after beating a man to death in a barroom brawl. His reputation as a pugilist was quick to follow him to the North Fork and Angevine was known to put many a man on the floor of the saloon until one night when he found himself there instead. This particular fistfight would be his last as he was beaten within an inch of his life. After this, the cowboy vowed that he would never be without hard iron in his fist when a fight was likely.

He purchased a Colt single-action revolver and set to work filing off the gun’s trigger sear. The modification was tricky, and a less-experienced gunman might have lost some toes in the process, but Angevine practiced day and night until he was quick as a snake and his accuracy was deadly. With the sear missing, there was no need to pull the trigger for each shot and the weapon could fire as fast as his hand could fan the hammer.

The first victim of his triggerless gun was John McIntyre, who had poked fun at Angevine on a cattle drive, for his incessant practicing with the gun any time the cow-hands were idle. McIntyre took a bullet to the shoulder for his remarks, and it’s said that he was only spared his life because Angevine’s leather work glove became entangled in the hammer.

The modified Colt’s next casualty wasn’t quite so lucky. Riley Adams was a neighbor who, from Angevine’s doorstep, entered into an argument concerning a fish trap on the North Fork River. The argument left Riley dead on the front yard and the gunslinger fled the valley with a posse in hot pursuit. The posse lost his trail somewhere in Wyoming and “Wanted” posters with a reward of $1000 were soon scattered throughout the West.

Angevine remained elusive for many months but was said to have grown tired of life on the run. While two Marshals were traveling on a train through western Canada, they were discussing the wanted outlaw. A tall cowboy, who overheard the conversation, strode up to them and asked, “How’d you like to go back to the states?” The officers raised their eyebrows and the gunslinger simply said, “I’m Sam Angevine.”

Upon his return to Colorado, he prepared a written statement to the local authorities. The following is an excerpt from the Delta Independent, dated August 7, 1888:    I was lying on the bed, reading a paper and waiting for the coffee to boil for dinner, when I heard Adams coming up the front porch. He came up to the door and stood there a moment without saying a word or knocking, but I, supposing it was Stuart, who was farming my place, did not look up. He said, “I want you to quit stealing my fish.” I answered, “I did not steal your fish.” To which he replied, “I placed two lines out there this morning and there was no one here to steal them but you.” I said, “You are a liar if you say I stole them!” He then said, “You G_d- s_ of a b_, don’t you call me a liar and came for me. I pulled my revolver, which I had taken off and lied on the bed, and shot as quick as I could without taking aim, as he could easily have jumped on me. He whirled, said, “I am shot.” and ran out of the door down the path. I got my hat, saddled up my horse and left. If I had only had a witness, I would have given myself up and stood trial. Samuel Angevine

Surprisingly enough, the court ruled to acquit Angevine and determined that he had shot Riley in self-defense. Sam attempted to settle back into his life in the North Fork but his reputation had grown in his absence. Several unsolved murders were attributed to him in the months that followed. Meanwhile, Angevine hung up his triggerless gun and did his best to persuade folks in the valley that he had changed his ways. But as time went by, paranoia crept in, and Sam began to worry about the ghosts of his victims and their very-much-still-alive relatives coming for him and seeking revenge.

It is rumored that from that time on, he would only sit with his back to the wall, facing all doors and windows and that he would never enter a saloon without making a circle of the building’s exterior first. He never lit a lantern in his house after dark for fear of being seen from outside and he purposely allowed dust to accumulate on the floor so that he could see if intruders had entered before him. He even built escape hatches in the floor and roof of his cabin.

Reports claim that Angevine eventually drifted out of Western Colorado and headed north again towards Canada where, while en route, his triggerless gun took one final victim - himself. Whether guilt or paranoia was the ultimate motivation, no one can say. However, while researching local newspapers for this story, a contradictory piece of information came up in a paper dated December 8, 1905. Under the heading of County Notes, the simple statement read, “Sam Angevine, an old North Fork Valley resident, died Saturday, November 25, of pneumonia.” Perhaps fireless nights, a dusty floor, and the ghosts of his dead claimed the triggerless gunslinger after all.