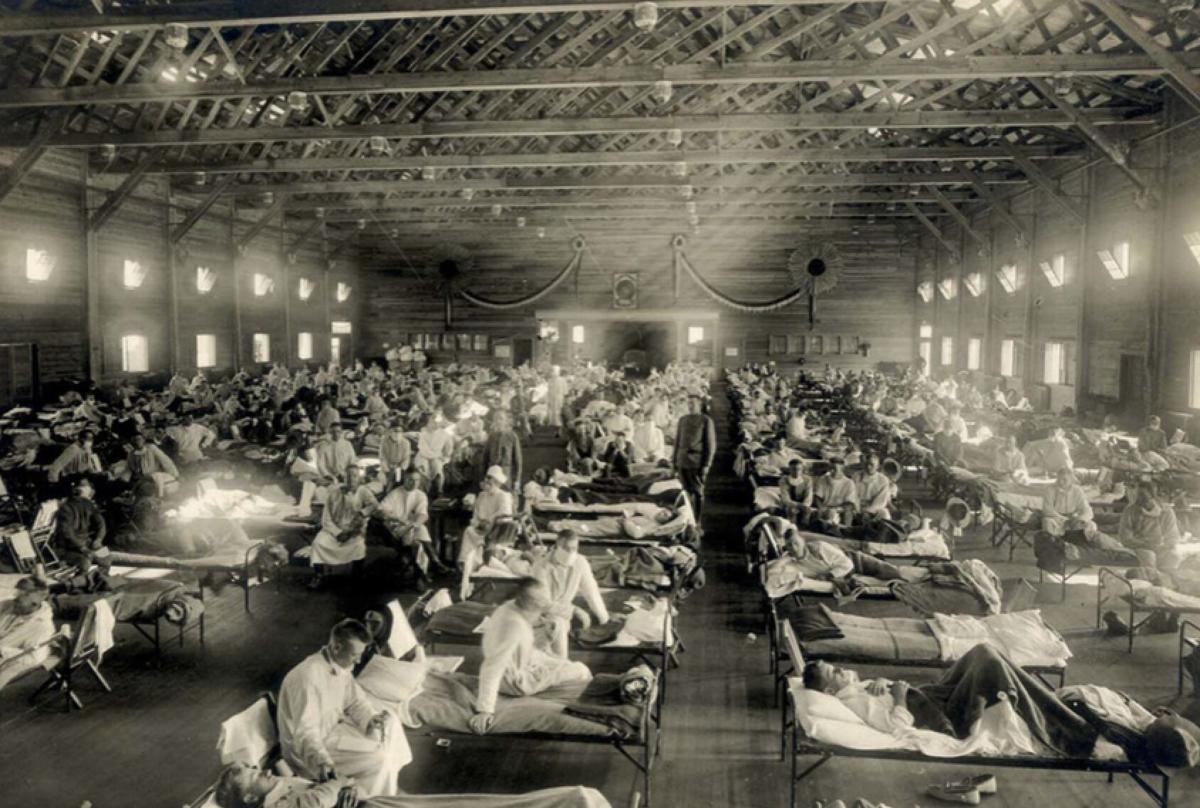 The first official cases in the US at Camp Funston, Kansas 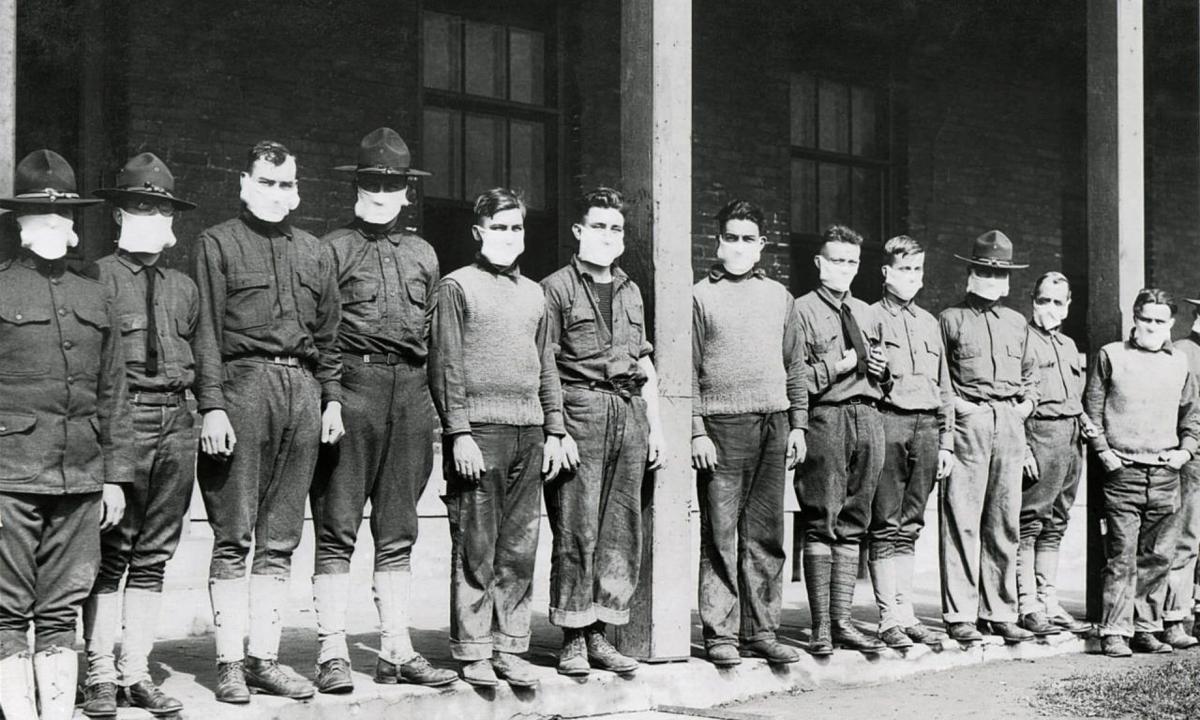 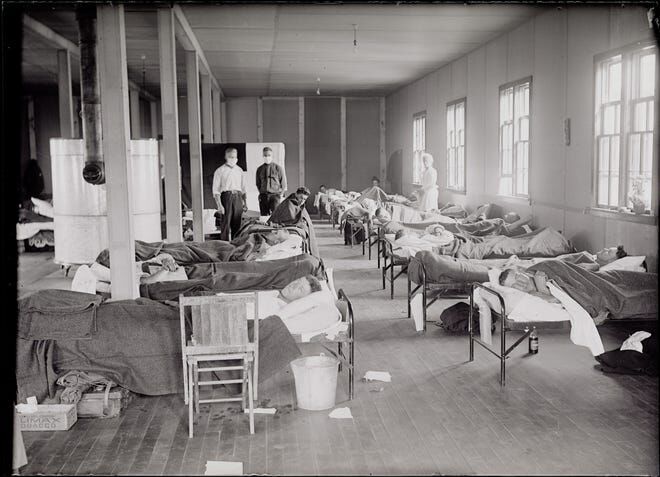 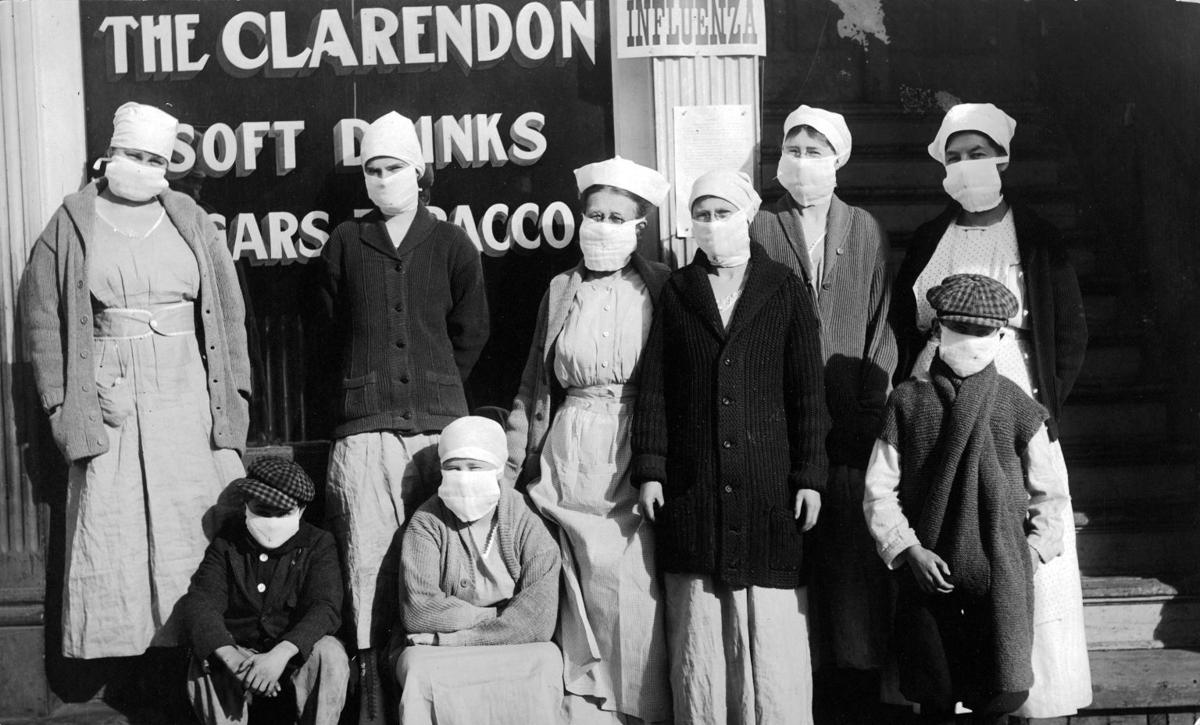 Nurses and children don masks to ward off disease 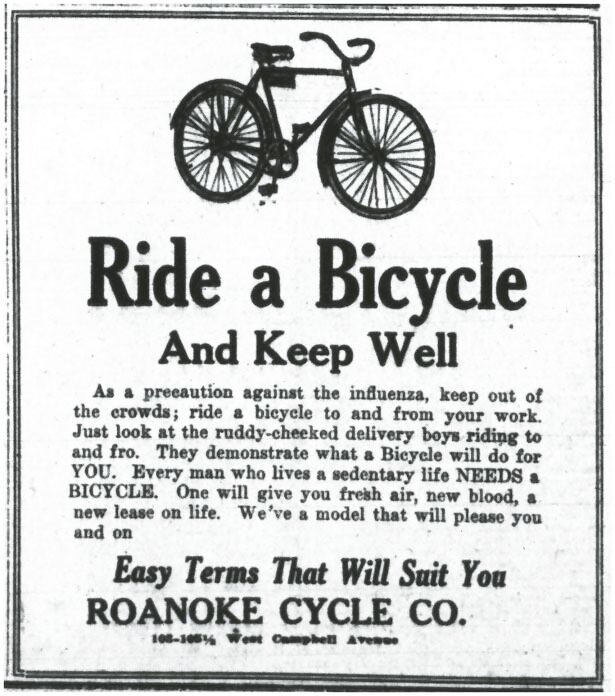 An ad for the cure 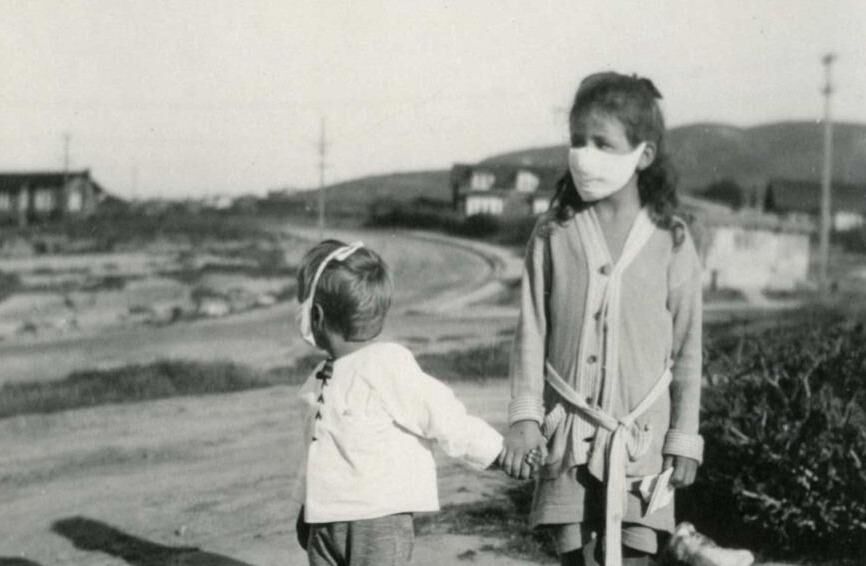 Waiting for the bus in 1918 Colorado Springs 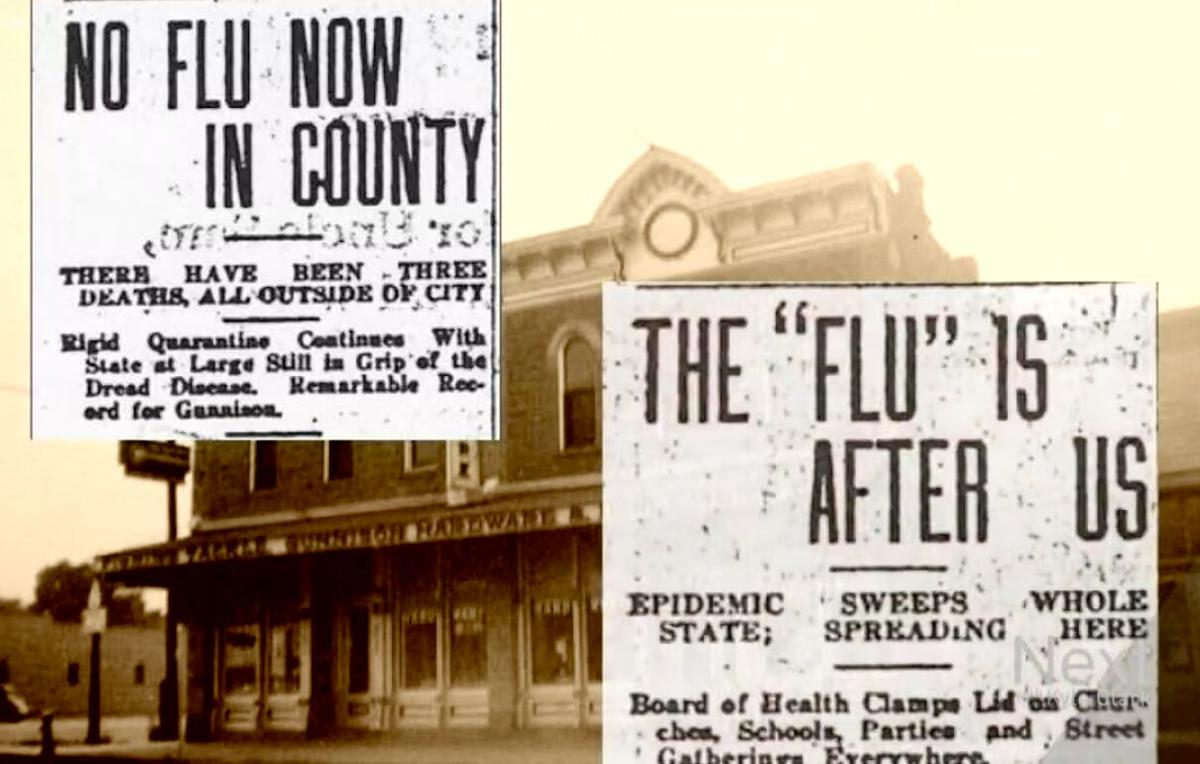 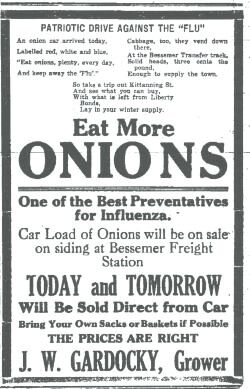 Keep away ‘the Flu” with onions

“History doesn’t repeat itself, but it does rhyme.” - Mark Twain

In the spring of 1918, an increase in pneumonia cases were reported in the United States. By the time summer wound to a close, a particularly dangerous influenza strain had spread to nearly every country. Spain suffered one of the early attacks, and the “flu” was misnamed the Spanish Influenza, although it is far more likely that the virus originated in North America. It cycled through several mutations and challenged health care systems worldwide to the brink of collapse. Colorado was particularly hard hit, claiming thousands of lives in a matter of months. Counties on the Western Slope met the pandemic with varying degrees of success, but none would escape the year unscathed.

The pandemic lasted for 15 months in the United States. At the time, it was the deadliest disease in human history, killing between 50 million and 100 million people. Approximately 670,000 Americans died, although record-keeping was suspect at best in most states. Of the 25 million Americans infected, 20 percent who died were age five and younger. Life expectancy dropped by 12 years, and 50 percent of the deaths of U.S. soldiers at war came from the flu. Between September 1918 and June 1919, the flu killed nearly 8,000 Coloradans.

Epidemiologists theorize that the virus traveled to Europe, where it mutated to a deadly strain before returning to the United States in the late summer of 1918. Carriers came in the form of returning soldiers from the battlefields of World War 1. Cases escalated in the fall. In September, 12 soldiers reported sick at the University of Colorado in Boulder. Four days later, 75 sick students were being quarantined in fraternity houses. Even without the military connection, civilians would have spread the virus into Colorado. On October 11, the Loveland Reporter assured readers that the disease was under control in northern Colorado. The following day, cases at the Colorado Agricultural College in Fort Collins, now Colorado State University, spiked to 30. Two days later, the number trippled to 94.

The following months would bring consecutive waves of the virus as cases and deaths ebbed and flowed across the state. Often the low points lulled doctors and authorities into believing that the worst was over, lifting restrictions, only to be hit with another rise in infections. Eventually, a series of measures and rules designed to combat the virus was set into motion. Some of these were entirely logical and thoughtful, and others bordered on the absurd, advising people to avoid wearing tight shoes. However, doctors knew that the virus was airborne and that avoiding large crowds, covering coughs, and washing hands were essential, straightforward ways to combat the spread. At times, citizens were required to wear masks in theaters and other public places, but enforcement proved difficult.

Resolutions, like mandatory closings and mask orders, upset many business owners and citizens and were often ignored. A group of masked theater owners converged on the Denver Department of health and demanded they were allowed to keep their doors open. Volunteers at the Red Cross were unable to keep up with the demand for masks. Theaters provided them at the door for a nickel. Still, there was much opposition. One editorial in the Post claimed that wearing a mask caused your nose to fall asleep. Business owners from Denver to Grand Junction opposed several health regulations. The Mesa County Council of Defense advocated for quarantining the sick rather than closing any stores.

The pandemic laid bare the state’s lack of medical resources. Doctors were stretched thin in larger communities, and many rural towns had no doctors. Delta County had yet to build a hospital at the time. Many teachers were brought in as nurses since schools were closed. It was reported that in Salida, the madam of a popular brothel volunteered her ladies to the cause. Efforts for an effective vaccine fell flat as trials from a shot, developed at the Mayo Clinic and tested on patients in Montrose proved ineffective. A general breakdown in the trust of health officials began to grow. What’s more, doctors didn’t have any answers beyond basic tactics to slow the spread, and those suggestions were often ignored.

While several businesses, notably movie theaters and restaurants, lost a great deal of business due to both public avoidance and regulations designed to curtail the spread, other entrepreneurs found ways to capitalize on the chaos. Everything from bicycles to onions was presented as an effective elixir against the flu. The hot springs and vapor caves in Glenwood Springs were advertised as having healing powers for anyone afflicted. Several questionable home remedies found their way to the population, including one claiming that carrying an acorn in your left vest pocket should do the trick to keep you from getting sick.

In nearby Gunnison, authorities decided to take drastic measures to close their community to the outside world. They turned away anyone traveling to the area. Trains were still rolling through town, as Gunnison was a major stop on the railway, but no one was allowed to leave the train. Those who did faced jail time. For several weeks, the community managed to avoid the disease that was ravaging nearby towns. They were initially so successful that the incident later became the focus of a case study for researchers at the University of Michigan. However, people, like viruses, are not easy to contain and the pandemic eventually found its way into the community by late-December.

In Ouray, the town recruited guards to turn back miners returning from Silverton and Telluride, but the effort was fruitless as residents had already been infected. By mid-December, the Durango Herald reported that the Ouray quarantine had failed and that there were more than 200 cases between the town and Camp Bird Mine. To the south, the high mountain town of Silverton suffered a similar fate to Gunnison. Because the community was largely isolated during the winter months, they managed to postpone the flu's onset, but it would not let them be for long. A mid-October edition of the Silverton Standard newspaper reported that they had no known cases of the virus. The following week’s edition was devoted almost entirely to obituaries as over 125 deaths were chronicled, and there would be more to follow.

The toll was rising in Delta by November. A Delta Independent issue from November 8 listed 191 confirmed cases, and the majority of obituaries from the month stated the cause of death as influenza. Many doctors and health care workers fell sick at the time, making details challenging to obtain. Despite their losses, authorities in Delta did not make the decisions to quarantine the community against outside travelers like some nearby communities. The waves of infection continued to roll across the country and throughout Delta County. While most of the United States saw the virus wane and disappear by the spring of 1919, Delta County reported 42 percent of its cases in the earlier part of that year.

With the pandemic officially over by 1920, the residents of Delta County turned their attention to the lack of a hospital, which had been sorely missed during the outbreak. The January 2 issue of the Delta Independent published an article titled, “Delta County Hospital Now Reported To Be A Reality.” A few weeks later, with the assistance of several generous community donations, residents saw the new hospital under construction in downtown Delta. The pandemic was still fresh in the minds of the citizens of Delta County, and one of the major selling points for the endeavor was the possibility that another pandemic would strike again one day.

After living through more than a year of our own pandemic, it doesn’t take a historian to note the parallels that weave the common threads of 1918 and 2020 together. Very near the prophetic round figure of 100 years apart, the course of each virus, and the reactions and responses from citizens and authorities, present more than a feeling of familiarity. But as with all things related to the human spirit, the will to carry on and seek-out brighter days ahead was ever strong in 1920 - much as it is today. The unanswered question is whether the darker days of our rapidly receding past will be remembered with clarity 100 years from now.