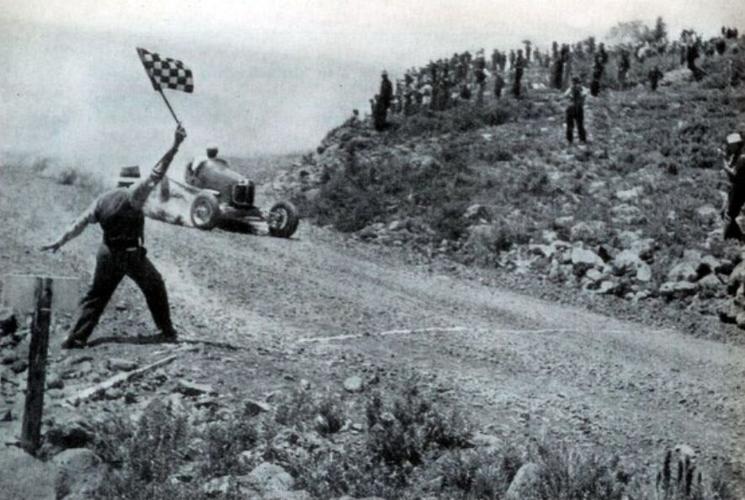 Louis Unser about to cross the checkered flag -1942 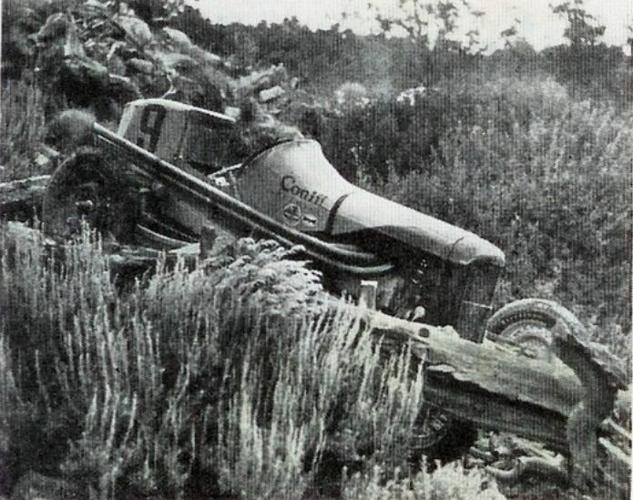 Champion Al Rogers received a compound fracture of the pelvis at the 9 mile mark. 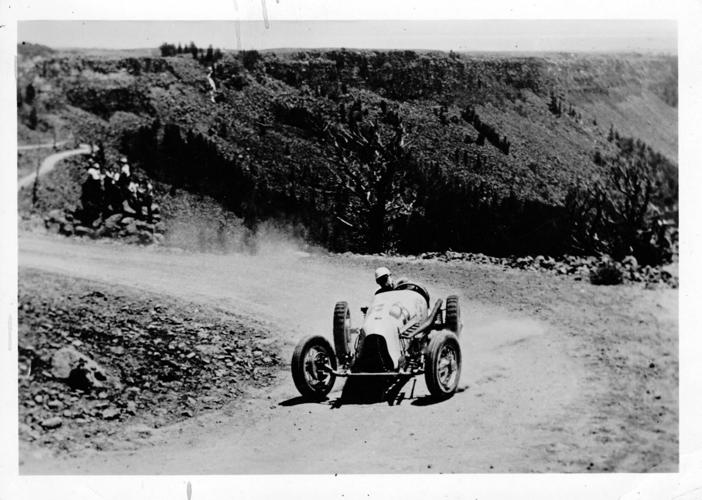 One of the original racers in 1940 rounding a corner 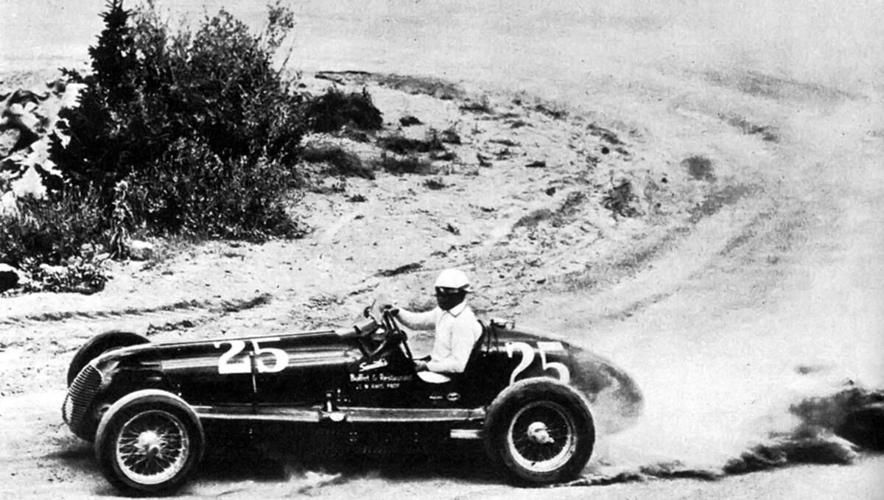 Drifting one of many corners on a hill climb 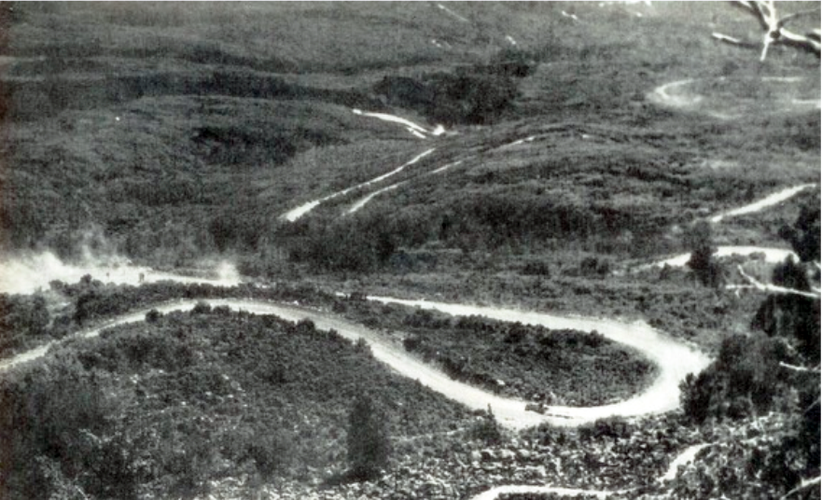 Lands End Rd as the dust flies from competitors 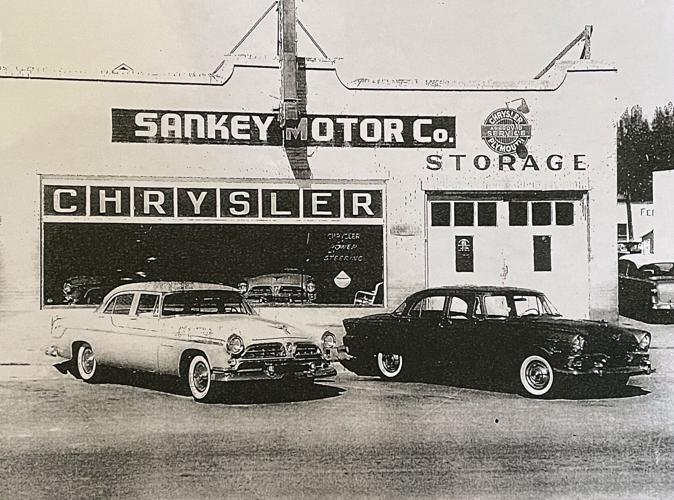 Sankey Motor Co. One of the many dealer families connected to racing in Delta 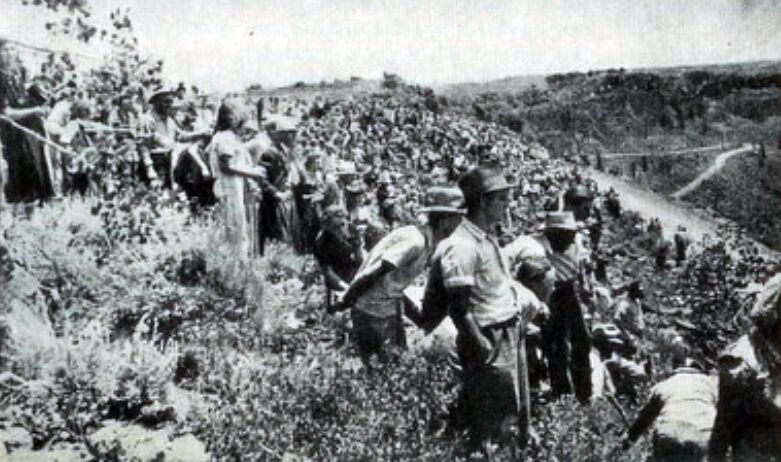 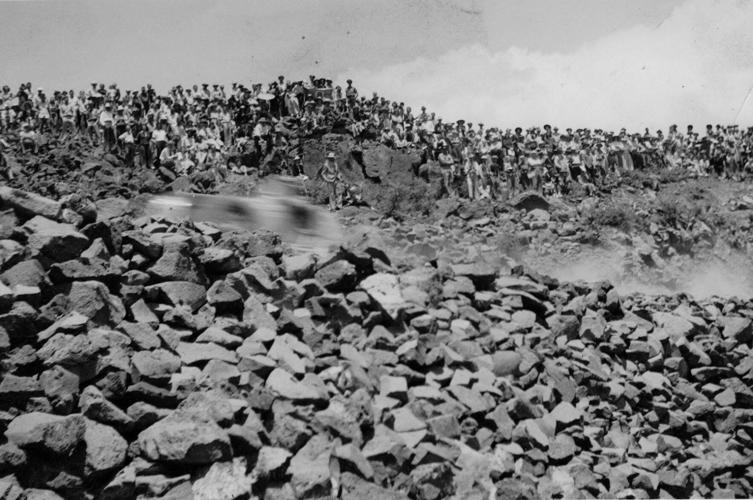 Louis Unser in a blur as the crowd looks on 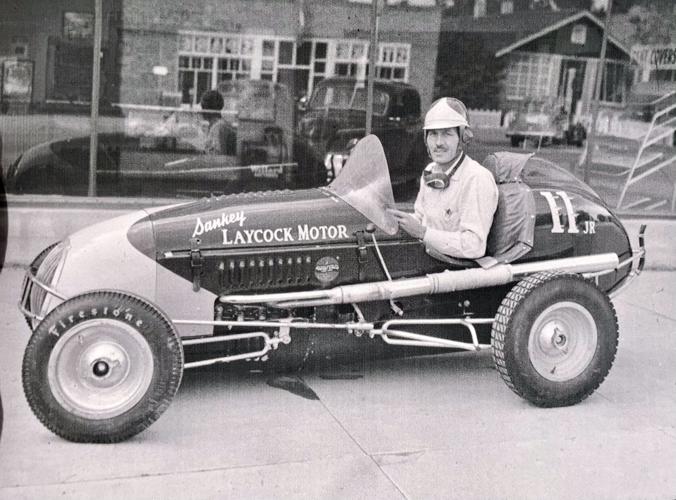 Wayne Sankey in his midget racer

The Mid-20th century in America was known as the Golden Era of automobiles. A real orgy of excess spawned a prolific boom of chrome-laden offspring from a host of makers in Detroit and beyond. These gas-thirsty road-kings encouraged more and more enthusiasts to pit men and their machines against one another in duels of ingenuity and skill. Racetracks blossomed like wildflowers across the country in the early part of the century as the automobile established its claim as the new icon of the American spirit. The Western Slope was rife with racing opportunities, but none had as much mystique or commanded more respect than the Lands End Hill Climb.

While the sport of racing predates the chariots of ancient Rome, and tracks for auto racing were already being carved out as the first Model T rolled off of the line, it was the pre and post-World War II production battles that ignited the fuse for internal combustion competitions. Mechanics and drivers (sometimes one-in-the-same) modified already fast cars with massive engines, lighter chassis and new tire concepts to improve handling at high speeds. Several Delta County motorists joined the fray, including Delta’s own Wayne Sankey – whose mother must have known that she had christened her son with the perfect driver’s name.

Several tracks were built in the area, including one in nearby Grand Junction and two on the north side of Delta, that supported stock car racing and midget car competitions – bullet cars built with meaty engines paired with shorter-than-normal wheel-bases and an ultralight body. Several local garages and automobile dealer families, including Sankey, and his in-laws, the Laycocks, were involved in the sport. Many Delta natives will recall crowding together on the hillside above what is now the Delta airstrip to watch the dust fly around the banked track. Area drivers and their machines became local heroes, and they all deserve a story of their own in the highlights of our local history. Still, the thrill-seeking drivers who participated in a nearby hill climb were of an altogether different breed.

Without a doubt, the most grueling and dangerous race to occur on the Western Slope was the Lands End Hill Climb. The history of hill climb racing actually predates the middle of the century mark by a wide margin. While the most famous hill climb is the run that serpentines up the iconic Colorado monolith, Pike’s Peak, the Lands End track was one that racers approached with the most trepidation. The original climb occurred in 1916, was shelved due to World War I and was revived again in 1940. It continued for two more years until war interrupted the event for the second time. The Lands End climb is the third oldest racing event in the United States behind the Indianapolis 500 and the Pikes Peak Hill Climb.

The 1941 course had 212 turns that stretched over 14 miles to the top of the Grand Mesa. The elevation gain on the course encompassed more than 5,000 feet before it crossed the checkered flag at 10,300 feet. The race was AAA sanctioned and drew over 12,500 spectators who crowded together on the route's hillsides. Many cars would never make it to the finish line. The race was later shortened for the sake of sanity, and for three years, it attracted professional drivers from across America and even drew the attention of some Europeans. Competitors included local Wayne Sankey and the champion of hill climbs, Louis Unser.

Unser said of the course that it was one of the most grueling competitions for both man and machine in the country. He described the track to a local reporter, “On every turn, the driver must have perfect coordination. On every one of the 50 switchbacks, he makes a split-second decision that must be right.” The seasoned driver, who was a five-time winner of the Pikes Peak Hill Climb, dubbed the Lands End track as far more hazardous than any other hill race because the gravel road was so narrow, and the many hairpin turns came quick, forcing drivers to take many of them sideways.

In 1942, the Grand Junction Chamber of Commerce presented Unser with a rabbit’s foot for luck before the race. And though he claimed that luck was already riding with him in his back tires, he made a show of kissing the furry charm at the top of the race as the crowd cheered his win. Unfortunately, the second war and a long hiatus of disinterest would see close to 40 years pass before the next competition would occur on the twisted mountain road.

The great race up the Mesa resumed in the 1980s as a new breed motorized chariots and their drivers resurrected the infamous hill climb. It ran sporadically with no set schedule for a few years until the early 2000s, when some motivated aficionados from the Western Slope decided to make the event an official annual occurrence. The Colorado Hill Climbing Association, founded in 1971 to build on the legacy of the Pikes Peak climb, now promotes this race along with the help of several local community members from Grand Junction and Delta. The event occurs in late summer each year.

With a brief hiatus due to COVID in 2020, the race is back on, challenging drivers and thrilling spectators once again. In 2019 around 75 racers participated in the climb, where local crowds watched as drivers drifted around switchback curves and reached speeds of more than 100 miles per hour. The local racing community is very supportive of one another. The camaraderie exhibited between the familiar competitors is as fierce as the event itself, and racers are quick to lend advice on strategy and a helping hand whenever parts are needed. The real challenge is a three-way battle between the racer, time and the mountain.

While only a handful of drivers and mechanics from Delta County have been involved with the Lands End Hill Climb over the years, the history of the local racing community contains a long list of competitors from stock and sprint cars to modifieds and midget racers. There is something about racing that embodies the true spirit of the west. At some point, the power of the horse was replaced by pure horsepower. Still, a lone competitor astride their trusted steed in a race against time remains a romantic ideal, and the contest presents the ultimate challenge of skill and ingenuity for the gladiators of a new century.

Check out Lands End International Hill Climb’s Facebook page for information on the next race.