Skip to main content
You have permission to edit this article.
Edit
Home
Spotlight
Announcements
Business Directory
e-Editions
Shopper
1 of 7 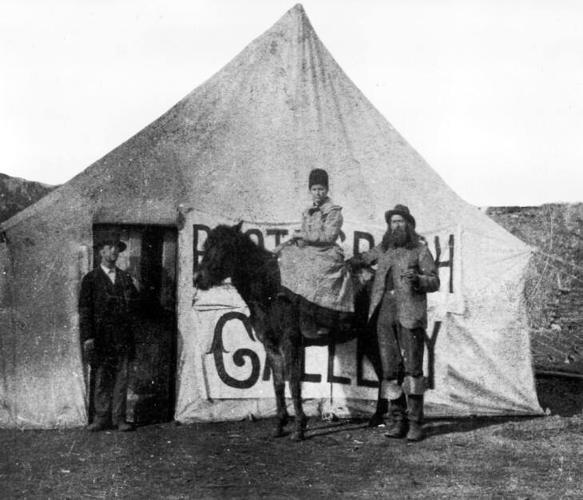 Moccasin Bill and his daughter in Wetmore, Custer County, Colorado 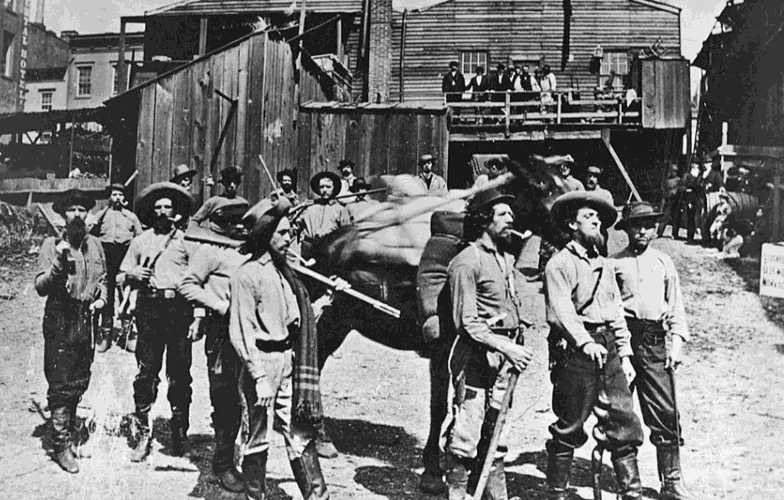 The scouts of Fort Scott Kansas 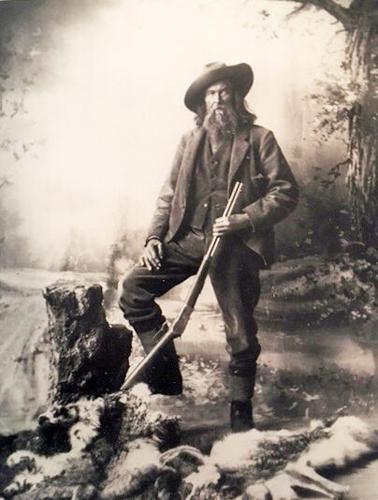 Portrait of Moccasin Bill Perkins, the last of his kind. 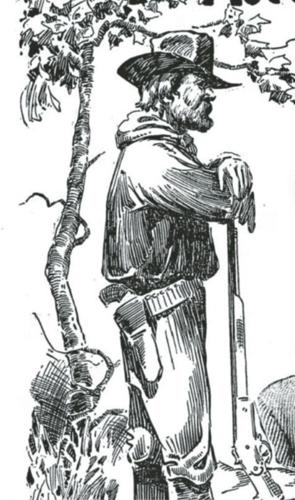 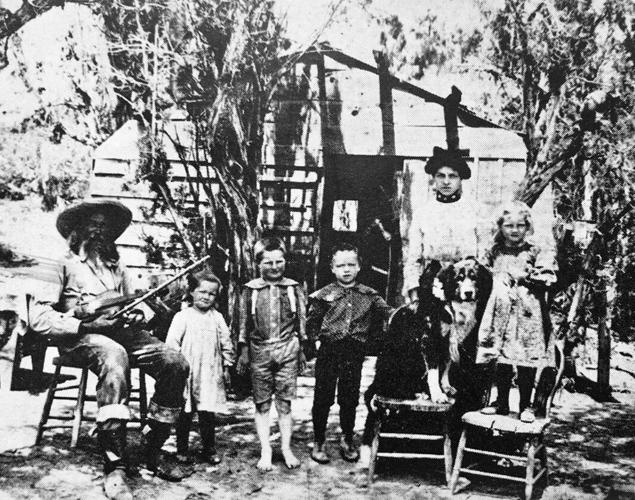 Hunting Lodge of Moccasin Bill in the West Elk Mountains with his son in law, daughter, grand children and hunting dog “Sport.” 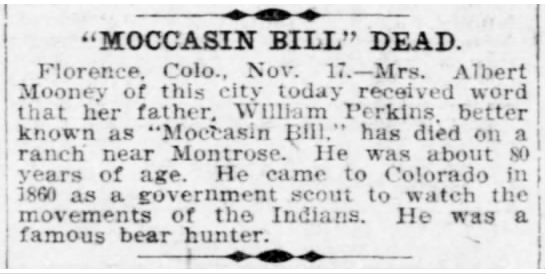 Portrait of Moccasin Bill Perkins, the last of his kind.

Western folklore of the late 19th century dazzled readers with audacious yarns of the “big man.” Tall tales of larger-than-life characters like Paul Bunyan and John Henry stretched readers’ imaginations when it came to the stories of westward expansion and the frontiersman that stalked the hills like giants among men. One of the most memorable and fantastical characters of “fakelore” was Pecos Bill, who purportedly dug the Rio Grand River with a stick and rode a wild cougar instead of a horse. While these fictitious exploits were beyond absurd, there was a woodsman who may just have been the real-life inspiration for Edward O’Riley’s outrageous stories.

He was a true mountain man who was a mountain of a man himself, and just as in life, his tombstone in Crawford cemetery towers over those nearby. He was known to all as Moccasin Bill, and his adventures should have made him one of the most talked about and iconic characters of the old west. However, sometimes people of the past are overshadowed by the fictional characters that grew in their wake. Fortunately, it’s never too late to set the record straight - or at least as straight as one hundred and fifty years of embellished campfire tales and sensational old news clippings can make any story about a giant of a man.

William Henry Perkins was born in Indiana during the harsh winter of 1825. Determined to make his mark on the world, it was rumored that Bill was born with a set of six fully developed teeth in his mouth. While this somewhat preposterous claim was scoffed at by his own children, his mother, who was interviewed by the Indianapolis Star many years later, confirmed that this was indeed true. He spent the better part of his youth practicing his skills in the woods as a master collector of fur-bearing animals and was known in the territory of southwestern Indiana as the boy trapper. At the age of seven, William was allowed to carry a gun for self-defense as he ranged farther and farther away from the Perkins homestead, and the area was known to be stalked by a notoriously large cat that had already taken its share of local livestock. One such particular outing would make Bill the subject of legend before he was twelve.

The young man set out on a fall morning with his gun on the hunt for a Thanksgiving turkey. His favored hunting grounds along the Wabash river proved fruitful as he bagged a nice gobbler for the family table. With the shadows deepening in the forest around him, he set out for home but not before his quick ear caught the stealthy tread of a large animal dogging his steps from behind. Over his shoulder, he caught the shape of an enormous panther creeping through the undergrowth. As he quickened his pace, the cat followed suit until Bill found himself in a dead sprint toward the sight of his boat. With the surest knowledge that he would not be able to outrun the beast on foot, he flung the turkey at the panther’s grinning maw, distracting the cat just long enough to jump in his skiff and make his escape across the river.

Darkness had fully engulfed the scene by now, but the unmistakably loud splash told Bill that his pursuer was not want to give up so easily. Upon his approach to the opposite bank, he turned, aimed at the night, and shot. He pulled his boat ashore and high-tailed it across the fields to the farm, still some ten miles distant. Either the bullet had found his mark, or the river had cooled the cat’s desires, for the young man made it home (else his tale would have ended before it began.) But this event had turned to a personal nature for Bill. The following morning, he returned to the river with a pack of hounds and proceeded to track, tree, and bring down the “Terror of the Wabash” with one shot. His return to town was celebrated with much fanfare.

The lad that grew to be a man eventually towered over just about everyone he met. He stood six-foot, seven and one-quarter inches in his boots and was said to be of Herculean proportions. While he was more than prominent in stature, he was known to be soft-spoken with good humor and a gentle nature. He was also as agile as the panther he had brought down as a boy. His steps were broad, and they would eventually take him across the country to the steeps of the Rocky Mountains, where he would thrive in the large landscape for which he seemed well made. It was here that he would acquire the nickname that he would forever carry. However, none of this would transpire before marrying at the ripe old age of 19 in Missouri. He and his wife, Maryann (Hart) Perkins, proceeded to have no less than ten children over the next twelve years – four sons and six daughters.

The oppressive conditions imposed by civilized society prompted Bill to move his growing family ever westward until they landed in Fort Scott, Kansas, at the edge of the expanding western territories. There, Bill accepted the welcome diversion from domestic life as a government scout whereby he collected several arrowheads in his body during multiple skirmishes with the plains warriors. He blamed this on his height, claiming that he made “too well of a target” as compared to the others in his company. He attempted to farm when he found himself back in Fort Scott, but the comforts of complacency eventually drove him to head for the hills, setting off off to try his hand at mining in the Rocky Mountains near Rosita, Colorado.

In the throes of a particularly nasty winter, Bill’s mining compatriots left him alone to guard the claim while they set out for supplies in nearby Rosita. Apparently, the lure of a warm hearth and an over-abundance of their favorite beverages caused them to temporarily forget about their partner marooned above timberline with dwindling food stores. Later, Bill would tell how he went through the dregs of his supplies and that once the coffee that he made would no longer color the snow, he set out for town himself, his feet shod only in a thin pair of moccasins. By the time he made it to civilization, he had found it impossible to remove the frozen shoes without stripping the skin from his feet. They had become fused with his skin, and he was forced to wear the buckskin shoes for several weeks until his feet had a chance to heal. The winter raged on, and it is rumored that he decided to glue another pair of moccasins on top of the original pair and then repeated this process until his feet, which were already unnaturally large, were of a monstrous size – thereby earning him the nickname, Moccasin Bill.

He was among the first to discover ore in Leadville and built the second house in that settlement, where he eventually moved his family. But it wouldn’t be long before Bill’s wanderlust took hold of him again and pulled him to the other side of the Rocky Mountains, where he landed on the Western Slope. It was here, in the newly open territory of Delta County, that Moccasin Bill would make a name for himself as a hunter of note when it came to tracking down bears and of course, mountain lions. He was already quite familiar with each and had, in fact, recently saved one of his daughters from an angry sow, that the young lady had unwittingly separated from her cub on the trail. It is said that, as always, he stopped the monstrous grizzly cold with a single shot to the heart.

The incursion of new settlers drew increasing conflicts with problematic predators on the slopes of Grand Mesa, and Bill was employed by the Big Muddy Cattle Company to rid the grazing lands of the large cats and bears who were making meals of their stock. During his five odd years with the outfit, he felled more than 40 bears. At the end of such time, Bill was 75 years old, and a new century had dawned on the west. Perkins never lost his instinct for the chase. In his later years, he continued to make sojourns into the hills, never failing to bring home some trophy to solidify his longstanding reputation as a great hunter. It was known from Ouray to Meeker that Bill was the ultimate crack shot of the Western Slope, and he proved his position many times in contests at the Mesa, Montrose, and Delta County Fairs. His unfailing good humor won for him the goodwill of associates wherever he traveled, and he was ever known to champion the cause of the underdog, simply in the interest of fair play.

The days of his golden years were mostly spent at his home in Crawford, where he found great pleasure in playing the fiddle to the delight of many young lads and ladies at the Bell Creek Dance Club and at local barn dances in the North Fork Valley. His looming presence onstage was only outshined by his prowess with the bow, as he had taken to practicing the instrument day and night until he had mastered the craft. On warm summer nights, it was not uncommon to hear his favorite tune, “The Arkansas Traveler,” lilting through the valleys of Crawford Country.

When Moccasin Bill passed away in the fall of 1904 at his home, comforted by the youngest of his six devoted daughters, Ella, no casket could be found in the county that could accommodate his enormous size. His family employed a local carpenter to make a coffin of suitable dimensions that would be fit for a man who was truly larger than life. His tombstone reads, “Moccasin Bill Perkins Age 78 years 10 months 20 days,” every one of which, he lived to the fullest.

History, along with the sensational pulp paperbacks of the late 1800s, left us with the names of a handful of men who symbolized the spirit and size of the untamed west. Although the legends of Moccasin Bill never seemed to gain the notoriety that others did, those who knew of him were well aware that he embodied the very heart and soul of the mountain man, and that with his passing, a way of life had also passed. Not long after his death, an article in the Sunday Star was penned about his exploits. It was aptly titled, “The Last of His Kind.” It probably goes without saying that Bill was buried with his moccasins on.