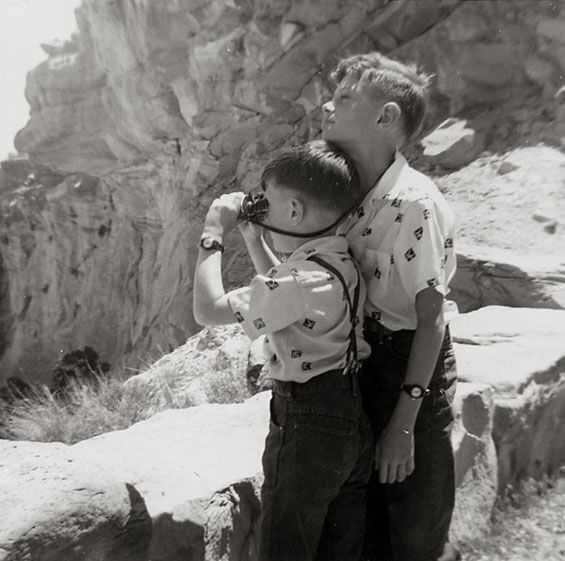 Terry and Denny at the Black Canyon in 1957 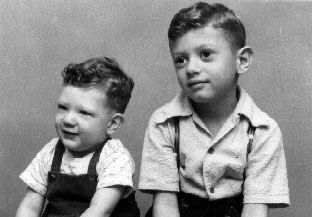 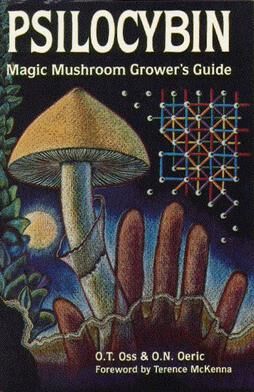 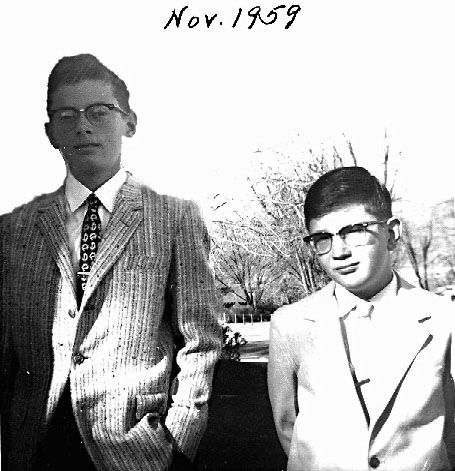 Terry and Denny in 1959 at the Paonia Town Park 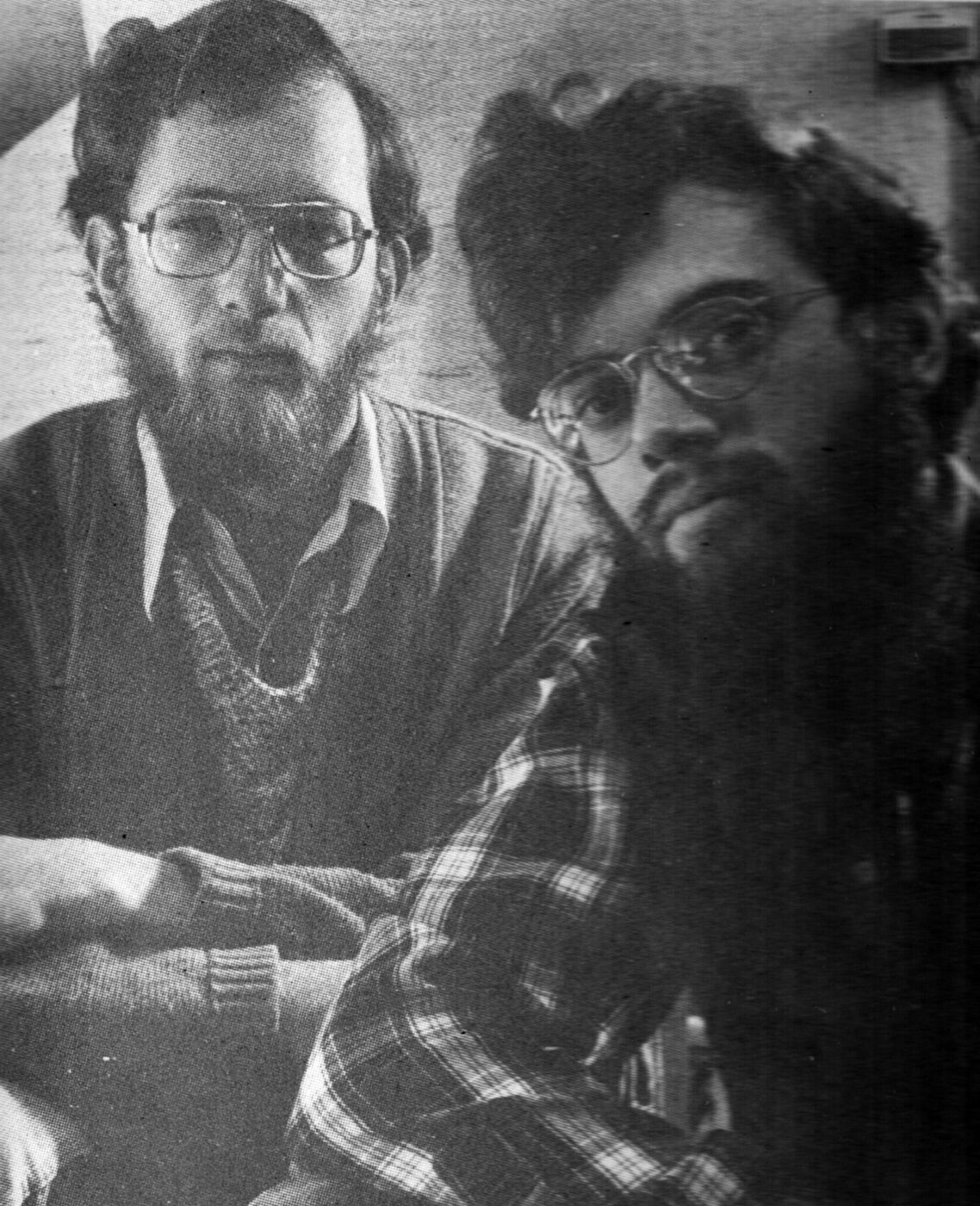 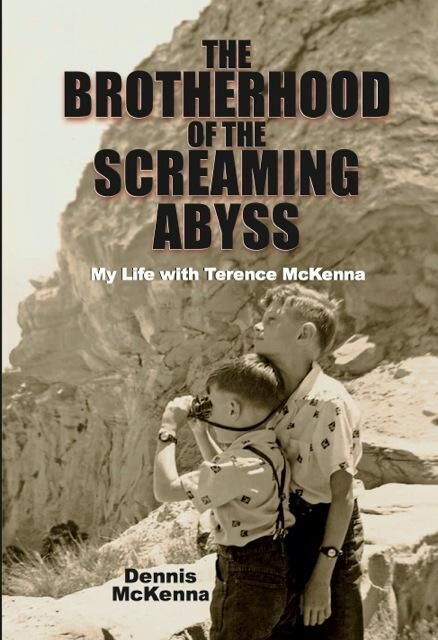 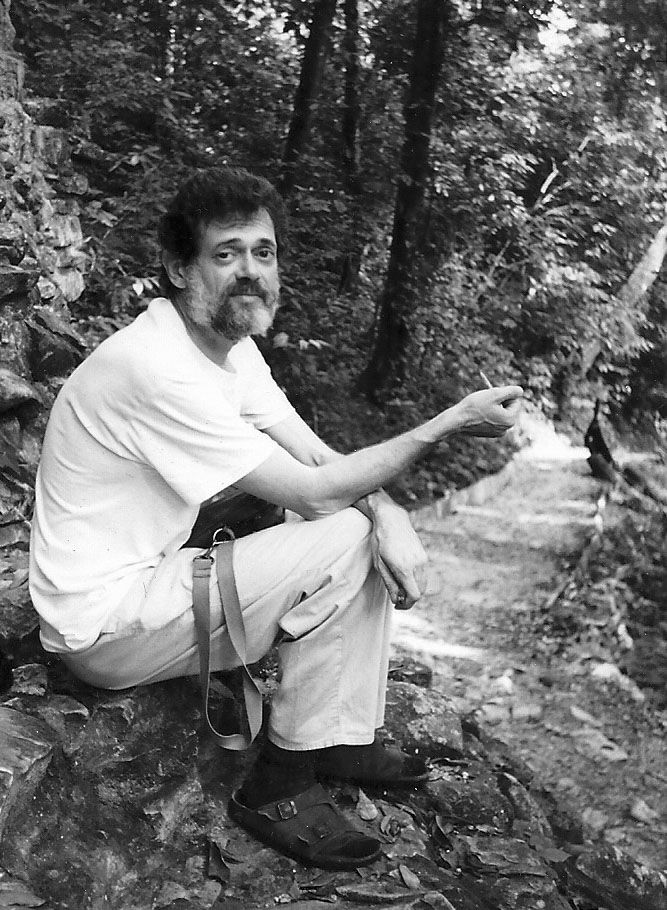 Terrance on the trail in Hawaii

In the past, Historical Highlights has featured several pioneers who have made their mark on Delta County. This month we turn our attention to a pair of brothers, raised in the North Fork Valley in the 1950s and 60s, who became modern-day pioneers of a different kind. Terrance and Dennis McKenna grew up in Paonia, Colorado, but their journeys to South America, the Far East, and into the realms of hallucinogenic-fueled landscapes earned them status as counterculture icons. More importantly, they laid the groundwork for the serious scientific study of psychoactive substances as medicines used in the treatment of a host of mental health related conditions.

The name Terrance McKenna eventually became synonymous with mind-altering psilocybin mushrooms, and the outspoken older brother drew comparisons to Timothy Leary. He penned several books on everything from shamanism to human consciousness. The more scientifically-minded Dennis, who was four years younger than Terrance, was content to remain at the edge of the limelight, searching for empirical evidence through their endeavors. An image of the complimentary young duo captured by their mother at the Black Canyon in 1957 aptly sums up their personalities and their puzzle-piece relationship. In the photo, Dennis, the young scientist, intently peers through a pair of binoculars, while his older visionary brother, Terrance, gazes toward the sky.

A modest, ranch-style home near Fourth and Orchard in Paonia is where the boys spent their childhood when they weren’t trekking through the West Elk Mountains with their father, or exploring the dobies, collecting butterflies and rocks. Their father was an avid hunter, fisherman and all-around woodsman, and the boys had many opportunities to take in the natural world around them. He also introduced them to the world of science and, perhaps more importantly, science fiction, which exposed the boys to a variety of broad concepts, including the origin of human beings. The self-described “geeks” were voracious readers of Heinlein, Asimov, Bradbury, and especially Arthur C. Clarke.

The McKenna family was surrounded by a large, tight-knit extended family. Several members of the family still reside in the area today. They attended the Catholic Church, where both boys enjoyed talking about philosophy with the visiting Jesuit priests. As a teenager, Terrance became restless in the small town and pressed his parents to let him live with an aunt in Los Altos, California to finish high school. Living on the west coast opened doors and the mind of the young existential-minded Terrance, and upon graduation from high school, he enrolled in the University of California at Berkeley.

It was 1966, and the university had become one of the epicenters of the burgeoning counterculture movement when Terrance traveled home in July to visit his family. He shared ideas with his younger brother under the trees in the town park one balmy afternoon. The moment was seminal for Dennis, who remembers hours of introspective conversation. The age gap was dissolving, and the two shared more experiences and many books in the months to come. While Terrance was obviously influential on his younger brother, Dennis had a similar effect as he applied his knowledge  for science to the philosophical perspective. They were both beginning to wrestle with the ultimate questions: Where do we come from, and where are we going?

By the time Arthur C. Clarke’s 2001, A Space Odyssey, came out in 1968, they had already had their first psychedelic experience. The film stimulated the ideas of the evolution of consciousness in the human species. The premise of the movie is that it was alien influence and intervention that brought about our evolution into consciousness. The formative work of fiction would stay with the brothers McKenna. Dennis would later argue that it is possible that early humans found and consumed psychoactive plants, which were ultimately responsible for the mind-expanding jump in evolution - a catalyst for the missing link.

In 1971, driven more by curiosity than thrill-seeking, the brothers embarked on a search for the plant from which the psychoactive drug DMT is derived. A handful of modern philosophers were taking it at the time in Berkeley. The two set out for La Chorrera, Colombia, and although they did not find what they were searching for in the jungles of the Amazon, they found something else that would forever set the course of their lives. Dennis claims that although their intentions may have been somewhat misguided, their curiosity eventually offered them more than they ever bargained for. They found themselves surrounded by fields of naturally occurring psilocybin mushrooms, and their experiences with them were transformative.

After learning all they could about the cultivation of the fungi, they returned to the states and decided that it was their responsibility to share their experiences with other seekers. The McKenna’s published a book, Psilocybin, The Magic Mushroom Grower’s Guide, under different pseudonyms for fear of any repercussions. Before long, college kids across the county were growing mushrooms in jars hidden in the recesses of stairwells and under their beds. The book would go down as a coveted bible on the subject.

Terrance would continue to study, experiment, and write about a range of subjects, including psychedelic drugs, shamanism, philosophy, technology and more, ever advocating that psychedelics would be humanity’s salvation. His counterculture fame would catapult him to the lecture stage, where his thought-provoking philosophy was at once dismissed, embraced and revered. He promoted the idea that “psychedelics are not suppressed because they are dangerous, but because they provoke unconventional thought, which threatens the institutions that would rather do our thinking for us.”

Then, in 1999, the thoughtful guru with a sense of humor as bold as his quest for enlightenment was diagnosed with a rare and aggressive brain tumor. He immediately suspected his life of exotic drug use and questioned doctors who assured him that it was unrelated and that several studies actually showed that cannabis shrinks tumors. “Listen,” McKenna told them, “if cannabis shrinks tumors, we wouldn’t be having this conversation.” A host of support from well-wishers, on the alternative and mainstream circuits alike, rallied their support. However, the usually eager traveler would take his final trip, reluctantly, into the unknown on April 3, 2000. Perhaps he found his answers there.

Dennis, who received his master's degree in botany at the University of Hawaii in ’79 and his doctorate in botanical science at the University of British Columbia in ’84, continues to focus on the therapeutic possibilities associated with natural psychoactive plants. Controlled doses of psilocybin have since become an accepted and effective method for treating patients with PTSD and OCD. It is also being widely used with terminal patients as a means to come to terms with the process of dying.

While Dennis knows that he could have chosen a more traditional field of study, his overwhelming curiosity drove him to make the conscious choice to work in a controversial area. Curiosity and passion were what pushed both brothers to the fringes of their fields in science and philosophy. “Discovery takes place at the edge." Dennis offers, “That’s where the interesting stuff happens. We wanted to be there. Sometimes we were on the edge and sometimes we were over the edge.”

Twelve years after Terrance’s passing, Dennis decided to write a book about coming of age and into consciousness with his brother. The book revisited their relationship and put their exploits into perspective. The Brotherhood of the Screaming Abyss chronicles the brother’s lives together from childhood to the passing of his Terrance. He chose the prophetic photo, taken by his mother, for the jacket cover. Even after recounting their many voyages into the psychedelic world, Dennis is hesitant about his own belief in a life after death. However, he has difficulty shaking the feeling that his brother is always nearby, an ever-present existential ying to his scientific yang.

The ongoing research in psychedelics is opening the doors to an understanding that not only applies to medicines in therapy but also has promise as a fundamental tool for comprehending consciousness. Terrance once said, “Psychedelics are to consciousness research what the telescope is to astronomy.“ Thanks to the pioneering spirit of the brothers McKenna, the opened doors are shedding a little more light on some of the big questions.

Special thanks to Marty Durlin, who interviewed Dennis for KVNF in 2013. The piece was a wealth of information.  Dennis McKenna’s book, The Brotherhood of the Screaming Abyss, is no longer available in new soft or hardcover formats, but Kindle ebook versions are available on Amazon.