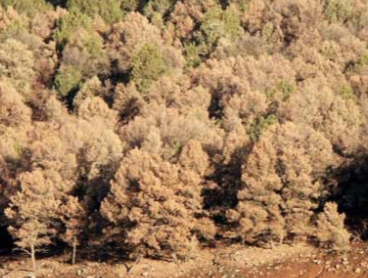 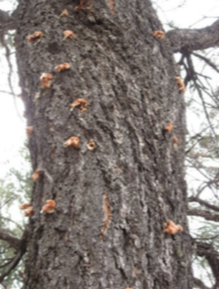 Piñon pine trees can be attacked by a native bark beetle called Ips confuses (Ips). Normally, Ips beetles limit their attacks to trees that are in decline due to root injuries, wounding, under watering or over watering. However, during high-stress situations like drought, Ips beetles are a considerable threat to healthy trees. They will not attack juniper (cedar) trees.

Ips kill piñon trees by attacking in mass numbers. The adults create galleries (tunnels) between the bark and wood of branches and the trunk to mate and lay eggs. Once hatched, the larvae begin creating small galleries in the tree layers (cambium and phloem), which provide the entire tree with water and nutrients. The larvae disrupt these two layers with their galleries. This damage cuts off the tree's food and water supply, thus killing the tree. Beetles do not damage the interior wood of the tree so it can still be used for lumber or other products. Following a successful attack, the needles of the infested tree quickly fade from green to straw-colored. Needles will continue to decline, turning red and eventually brown. By the time the tree appears to be dying, the beetle generation that killed the tree has emerged and attacked a new tree. Ips beetles are prolific breeders, producing three to four generations in one season. The beetles become active in spring when nighttime temperatures are at least 40 degrees for two consecutive weeks and can remain active into late October when nighttime temperatures drop below 40 degrees for two consecutive weeks.

As a homeowner, there are a couple of management strategies available.

The root system of piñon trees include tap and spreading roots, they can reach two times out the height of them tree. If recently killed piñon trees are identified, the surrounding green trees should be inspected to determine if the Ips beetle has successfully attacked them. If beetle presence is detected, the trees may require management. Trees currently infested are usually still green and should be promptly removed from the landscape (burned or hauled away). It is important to remove trees with beetle larvae or pupa from the property before they emerge and attack nearby piñon trees. The easiest way to tell if a tree is or was infested is to look for entry and exit holes. If the tree had enough moisture available to produce sap during the attack, pitch tubes will be visible at the entry site (see Figure 1). The tree’s defense system will produce sap in an attempt to drown the beetle. The pitch will be thumbnail sized and with a reddish hue due to the sawdust created by the beetle as is bores through the bark. Exit holes occur after the tree is dead, these holes will be perfectly round and the size of a pinhead or a BB pellet. If exit holes are present, the Ips beetles have left and flown to another tree. This dead tree is does not contain any live Ips beetles and can be considered firewood.

Summary of how to manage Ips beetles during high bark beetle population periods:

-  If green trees need to be removed for reasons other than safety, this should only be done during winter months

-  Thin the forest, during winter months, to allow for more resources (water, nutrients, sunlight) to be available for each tree. Reducing the overall density of the forest and creating more space between trees will improve individual tree health and reduce wildfire intensity.

-Remove dead trees as time and money allow for wildfire hazard reduction and aesthetic purposes. This can be done any time of the year (no sap is produced to attract the beetle).

The prolonged droughts of 2016-2018, have caused great stress to our native Pinyon Pine trees.  This stress has allowed the Ips confusus beetle to take advantage by boring into the trunks of the trees and eating the cambium layer resulting in death of the trees.  Since we had prolonged drought and relatively mild winters, the populations of this insect has drastically increased.  Typically, Pinyon pines in the landscape are healthy enough to push out the insect when they are attacked.  However, over watering the pinyon pines is just as bad as under watering and not correctly watering the entire root zone.  Pinyon pines have very wide spreading roots extending twice the width of the crown at a depth of 6-16”.   Watering immediately at the base of the trunk is unneeded.

We now believe populations are so high that people should take steps to protect these trees as the ips beetles appear to be attacking healthy trees.  A combination of soaking the root system with water once a month and applying a soil insecticide drench would provide the best protective measures.  Adults overwinter under the bark.  See the handouts for recommended chemicals.  Dead trees should be removed then chipped, burned, buried or stripped of the bark to prevent beetles from moving to other trees.  Here are two links on ips beetles.

And view the attached information put together by the CSFS.

Ips are tiny, but come in large numbers.   Here is the progression of damage. And a look under the bark.

The reduced moisture levels in Western Colorado has created ideal conditions for many native bark beetle populations to increase. As their numbers expand, our piñon pine forests will be at risk to infestations due to the severity of the drought and susceptible stand conditions. Of particular interest in Western Colorado is the Ips engraver bark beetle, Ips confusus, which attack piñon pine trees.

Ips beetles have short life cycles, only eight weeks, and depending on warmer weather may produce as many as four generations per year between April and October. The short development time increases the length of their active period compared to other native bark beetles. The mountain pine beetle (MPB) that has only one generation per year (this beetle attacks ponderosa and lodgepole pines) or the spruce beetle that typically completes its development in two years (attacks Engelmann spruce). Ips beetle activity begins around mid-April when the weather has become warmer, usually when nighttime temperatures are above 40 degrees for two consecutive weeks. The early April emergence is comprised of the adults that were laid as eggs the previous fall, usually around September/October.

The first generation that emerges in the spring will infest stressed trees or freshly cut green logs/trees and the associated slash remaining on site (branches removed after tree cutting but still green). This behavior is different from MPB in several ways. MPB must have standing (vertical) live green trees that are in excess of six inches in diameter. Ips beetles do not require standing live trees. They can infest any green material that is larger than one inch in diameter, such as slash, freshly split green firewood and any part of a standing green tree. Therefore, some special recommendations are in order.